Amazing and heartbreaking biography of Zelda (Sayre) Fitzgerald’s creative and unusual life, pub’d in 1970. I actually came out of it with a deeper appreciation for Scott Fitzgerald, realizing that he never abandoned Zelda, churning out Hollywood scripts in his last years to pay for her hospitalization and their daughter Scottie’s Vassar education. And yet Milford lays out clear evidence of Scott’s pilfering of Zelda’s letters and diaries for passages in his work, most clearly plagiarized in Tender Is The Night (a book Scott was having enormous difficulties writing, not having published a book in 8 years and struggling with Zelda’s care). Milford notes that the letters written between the characters in the book are “not simply echoes from Zelda’s letters to Scott; there were whole phrases used exactly as he had received them.”

Line by line Milford carefully lays out the case that Zelda was a talented artist in her own right, through ballet, painting, writing novels/stories/plays. There was tension between the pair, a jealousy. Zelda wanted to be taken seriously as an artist, her husband was discouraged by the ease with which she wrote. When Save Me The Waltz was published, Scott had been furious and said that this was HIS material to use alone. Zelda felt differently, having been a part of that life as well. He did everything in his power to prevent it from being printed, and then the publisher did nothing to help the book with basic copy-editing assistance. Milford quotes someone who overheard Zelda saying to herself “I have always done whatever I wanted to do whenever I could possibly manage it. My book is none of my husband’s Goddamned business.”

Early in their courtship, Zelda wrote a letter to Scott in which she admits both ambition and realization of limits: “I hope I’ll never get ambitious enough to try anything. It’s so much nicer to be damned sure I could do it better than other people–and I might not could if I tried–that, of course, would break my heart.”

Unfortunately, the delicate balance of Zelda’s life began to spin out of control under the strain of training for ballet and dealing with Scott’s excessive drinking. Her sanity shrunk and schizophrenia grew larger. The majority of the biography is dedicated to dissection of her condition, her hospitalization in Switzerland, Maryland, North Carolina. During one of her early recovery periods, she asks Scott for books, “I have been reading Joyce and find it a nightmare in my present condition… and not Lawrence and not Virginia Woolf or anybody who writes by dipping the broken threads of their heads into the ink of literary history, please—”

In May 1933, Zelda and Scott had a session with her doctor that was recorded by a stenographer for our reading pleasure. Therein Scott says he is being destroyed by the marriage and that while Zelda had written some “nice, little sketches,” she “has nothing essentially to say. To have something to say is a question of sleepless nights and worry and endless motivation of a subject, and the endless trying to dig out the essential truth, the essential justice.” Several pages later in the transcript, Scott tells Zelda “It is a perfectly lonely struggle that I am making against other writers who are finely gifted and talented. You are a third rate writer and a third rate ballet dancer.” Zelda answers, “You have told me that before.” Scott: “I am a professional writer, with a huge following. I am the highest paid short story writer in the world. I have at various times dominated…” Zelda breaks in, “It seems to me you are making a rather violent attack on a third rate talent then.” They continue to circle around this issue, and it’s on the basis of Scott supporting Zelda with his writing that he declares that their life “is all his material. None of it is your material.” Finally, Zelda asks him what he wants her to do. “I want you to stop writing fiction,” he said. She had been working on a book about her own experiences with psychiatry and this apparently was too close to what Scott was working on in Tender. She’d resorted to double-bolting her door to protect her manuscript from Scott who swore to destroy it.

Allowed to paint, at least, Zelda shows real promise. In April of 1934, 13 paintings and 15 drawings were exhibited in Cary Ross’s studio in NYC with a small supplementary exhibit in the lobby of the Algonquin Hotel. Time magazine ran a review that Milford notes sounds like an obituary:

Last week.. Zelda Fitzgerald showed her pictures, made her latest bid for fame. The work of a brilliant introvert, they were vividly painted, intensely rhythmic. A pinkish reminiscence of her ballet days showed figures with enlarged legs and feet — a trick she may have learned from Picasso. An impression of a Dartmouth football game made the stadium look like portals of a theater, the players like dancers. Chinese Theater was a gnarled mass of acrobats with an indicated audience for background. There were two impressionistic portraits of her husband, a verdant Spring in the Country geometrically laced with telephone wires. From the sanatorium last week which she temporarily left against doctors’ orders to see a show of Georgia O’Keefe’s art, Zelda Fitzgerald was hoping her pictures would gratify her great ambition– to earn her own living.

Side note, she writes in a letter to her old doctor about her reaction to Georgia O’Keefe’s pictures: “They are so lonely and magnificent and heart-breaking, and they inspire a desire to communicate which is perhaps the highest function of anything creative.” 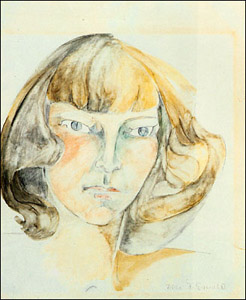