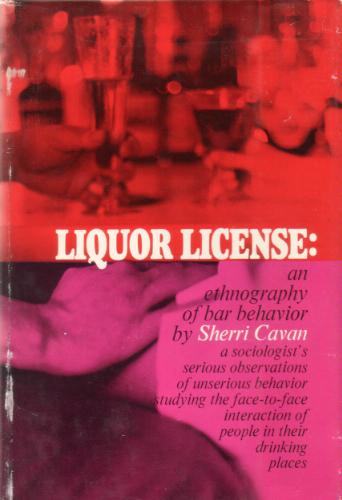 Sherri Cavan was my neighbor until a few months ago when she died from cancer. I never knew her, but B stumbled onto her remarkable life after dipping into an estate sale that held pure gold from the 1970s and 80s. After reading her recollections of studying sociology at Berkeley in the 1960s, I was convinced I wanted to read this work.

This book is an outcropping of her 1965 PhD thesis, Social Interaction in Public Drinking Places, in which she spent a few years bopping around San Francisco bars, nightclubs, etc. doing field research.

How much have things changed since the 1960s! The Alcoholic Beverages Control (ABC) statutes in eleven states “categorically deny females the right to work in liquor establishments. In California, women are permitted to work in public drinking places, but the tasks they are lawfully permitted to carry out are limited. Unless a woman is the licensee or the wife of the licensee of the establishment, she is prohibited from working behind the bar unless she restricts her activities to serving beer and soft drinks.” Punishment was either $100, 3 months in jail, or both. That’s about $800 in 2016 dollars.

Beyond the restrictions around work, there were several bars that did not allow women as patrons, assuming they were all prostitutes. Or if they’re permitted access, they are not allowed to sit at the bar. Conversely, many bars employed B-girls (bar girls) to coerce drinks from male patrons that they were later given bonuses for by the bar.

As a subject of sociological field research, Cavan strikes gold with studying bar behavior. She notes that the bar itself creates an open region where strangers are allowed if not expected to interact with each other. Just by coming in the door signals that you are open for conversation. Of course, you can also use your posture to connote otherwise:

Unlike those who are open for interaction, the solitary drinker typically minimizes the amount of physical space he takes up at the bar. He will sit with his forearms either resting on the edge of the bar, or flat on the bar before him, his upper torso hunched slightly forward over the bar, with all of his drinking accoutrements (drinks, cigarettes, change, ashtray, and the like) contained within the area before him. The area delimited by teh inner sides of his arms defines his visual focus as well, for transitory eye contact is not defined as civil inattention in the public drinking place; if the solitary patron is caught in eye contact by another, his whole posture may be discredited.

Within the bar context, you can recreate your biography at will, becoming greater, wiser, richer (more Trumpish) and no one will expose your sham. Besides conversation, attention can be granted to other things like the jukebox, or other activities. Bars offer various types of amusements, ranging from pinball, bowling machines (?), pool tables, cards, dice, darts, radios (!), television sets, silent movies, shooting galleries, and “in one establishment on at least one occasion, pencils, paints, pastels, and drawing paper.”