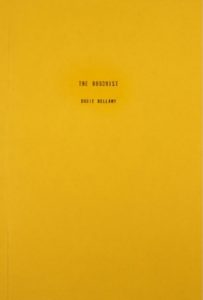 This came to me via InterLibraryLoan, glorious ILL, from a college in Michigan after I stumbled across a breadcrumb for it in Maggie Nelson’s Argonauts. It’s a shame no Bay Area library has a copy, since the work takes place here and has quintessential SF elements like getting Taoist internal organ massages and channeling her raccoon spirit animal. I’m not sure what to call this project—blog to book? Dodie took posts from her blog about working through a breakup with a Buddhist quasi-celebrity teacher and with various editing and the addition of the 1,000 character eponymous story, published it. It’s the story of recovery from a bad relationship (with the buddhist, demoted to lowercase) while in the comfort of an open marriage with a gay man, Kevin Killian, whom she met in 1981 in the “extremely charged scene of radical, queer, New Narrative writers working in San Francisco,” and with whom she is very much in love.

Once again, Eileen Myles stumbles into my path, Dodie mentioning her reading at Modern Times to promote Inferno back in 2010, then having tea at Ritual Cafe then latenight tacos. “Our conversation was divinely personal—gossip, relationships, writing projects, and how to hold it all together… Eileen talked about various spiritual practices she’s engaged in, and said if she let them slide, she started to believe what was in her mind.”

Once again, Bruce Connor and Jay de Feo cross my path, as Dodie mentions finding Connor’s 1967 film, The White Rose, detailing the removal of de Feo’s 1 ton painting/sculpture from her Fillmore Street studio, set to Miles Davis’s Sketches of Spain. And another new friend of mine popped up, Dodie reading Eva Hesse Spectres 1960, the catalog from the Eva Hesse show at the Hammer in LA. “My understanding of Hesse’s paintings is deepening through reading about them, but that pales before their incomprehensible confrontation. One is stopped before them in awe.”

“Journaling–or blogging–doesn’t have the same ability to hold strong emotion as does ‘real writing.’ A polished piece demands distance, that you sustain a meditative state for hours in which both you and your material are transformed. A sort of tempering. The rush of journal writing is more like a wave—there are plenty of waves behind it.”

She cites a fuzzy memory of a Lacan saying that “all relationships are about finding the right distance.”

To listen to: Pema Chodron’s This moment is the perfect teacher

To read: Helen Molesworth’s writing on art (Me, You, Us: Eva Hesse’s Early Paintings, plus whatever else she’s written)

To watch: Kathe Izzo (The Love Arist) and Carolee Schneemann, feminist performance artists. And Martha Rosler’s Semiotics of the Kitchen (1975).

To discover: the world of experimental writing in the Bay Area. Duh.