I raided the shelves of the Main library to greedily devour anything else of Ferber’s after I enjoyed So Big so much. This book of short stories was drolly prefaced by a few pages of Ferber commenting that the American short story was like hot pancakes, “the same deft pouring of the batter, the same expert jerk, the same neat flip of the wrist at the end.” Writing in 1933, she says you just need to look out the window to see the world changing before your eyes. “The writer of fiction finds himself [sic] trying to create in an atmosphere of a three-ring circus, with clowns, equestrians, acrobats whirling in mid-air.” The copy of the collection that I read had fabulous colored title page inserts before each story.

Glamour follows the hectic 24 hour day of a successful Broadway actress as she winds down one play while learning the lines/dress fittings/scenery choices/rehearsing for the next that opens in a few days. Her child is cared for by a nurse, her husband smokes his cigars and drinks and gives her an encouraging word when she needs it, but she is alone and striving for most of the day, except for the four hours of sleep. Truly exhausting to read. 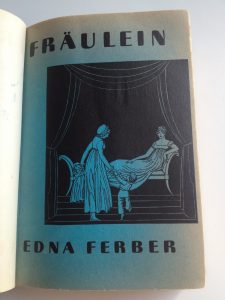 Fräulein has a similar setup for the mother, a rich society matron who entrusts the care of her two children to a German nurse (Fräulein Berta), only having to care for them on Berta’s one afternoon off, during which time the children throw tantrums and are monstrous. Berta sneaks off to avoid the competing attention of the butler and chauffeur, then does some shopping before heading to her husband/beau’s room where she cleans up, washes her hair, bathes, and they have a snack of ham and beer before heading out to dinner and a German Nationalistic meeting (replete with posters of Hitler, “silly-looking man with a Chaplin mustache, no chin, and one mad and one sane eye.”) Then they hit up a movie and she heads back to her employer’s house by midnight to retake control of the children, who are screaming.

Meadow Lark is a tale of the son of a Kansas farmer who tinkers around in his homemade shed, building himself a car, and then a plane that won’t fly, eventually escaping the farm to work his way up at the local airplane factory, with hopes of someday piloting his own craft. By leaving the farm, he also escaped the plan of his mother and neighboring farm girl to entrap him in marriage, which they liken to leaving feed for a bird (Meadowlark) and then grab him when he’s close. As he soars over the farm at last, the rejected girl says, “Don’t you worry, he won’t come down. He won’t ever come down.”

Hey! Taxi! brings us back to NYC where we follow a Ernie’s hack on a Saturday, the various fares he picks up, his under- and over-tipping, strange parcels he delivers, drunk people who can’t pay schlepped all the way to Brooklyn (the wife threw down exact fare from the window). His stops for coffee and donuts, or dinner at Charley’s (lamb with peas, cauliflower, and potatoes) or a late night snack of hamburger. The attempt to cash in on the post-Broadway crowd, but a war with the traffic cop there. Learned about a 33 1/3 customer– someone the cabbie would take to a club to drink (this during Prohibition), and the cabbie would make sure he was ok, then take him in, park his cab and wait inside with one eye on the 33 1/3 and one eye on the cash register. The cabbie would take 33 1/3 percent of whatever the person spent at the club.

Wall Street — ’28, supposedly written in 1928 (pre- crash), details the life of Cass Condon, an ultra-wealthy stockbroker who spends half of his day simply staring out the huge glass windows of his office, fingering the tickertape machine. He walks a mile then gets into a cab, getting to work by 9:30. “This was the malest street in the world. They poured into it—from the “L” trains and the subways, from ferries and surface lines and taxis—men and men and men, all curiously young and all curiously alike in some indefinable way.” His extremely competent secretary Miss Rosen “could, if necessary, have run the firm single-handedly. She had worked downtown since she was sixteen. There was nothing she did not know about Cass Condon’s business. No letter reached him that she had not first scanned. His telephone calls passed first through her. She separated the gold from the dross, the goats from the lambs; she was the alimentary tract which predigested Cass Condon’s tasks for him.” Condon’s life is quite easy, he leaves to have lunch at the club, taking a leisurely two hours. Then he heads to the gym where he did “a lot of undignified things that resembled the antics of an overturned beetle. He lay on his back and alternately brought his right and left leg up in the air and down slowly within two inches of the floor; he did half-somersaults; he turned over on his face and chinned the ground, his biceps screaming.” Then he goes to check in on his business interests at a motion picture company, falls in love with a girl on the screen and is invited to meet her at the Ambassador Hotel. They go, spend an hour or so chatting and listening to music before he leaves to head home to dress for dinner:

He went into his room. The lamps were lighted there too, and his clothes were laid out. [His wife] was calling from her room. ‘It’s quite a large dinner so there’ll probably be two or three cars. Don’t let that terrible Kassell girl get into ours when we go to the theater. And listen. Tell Jimmy that I don’t want to sit next to George at the show. Will you try to find out from Linda what they paid for the place at Syosset? Remember to speak to Otto..’ He lay down across his bed and even closed his eyes. Miss Rosen would never have asked him to remember all of those things. He breathed deeply. Scented air. Drawn curtains. Soft deferential footsteps. Low-pitched voices. Quiet. Luxurious. Shut in.

A prisoner until nine tomorrow morning.

They Brought Their Women was probably the most frustrating of the bunch, with a woman that you wanted to strangle. An overbearing wife who won’t leave her husband alone, even when he goes on a long business trip to Mexico she insists on accompanying him and not letting him try any of the native food or visit any native festivals. A frustrated artist, he’s trapped in the business world of his father, but at the end he shows a bit of sparkle as if he might chuck it all up and stay in Mexico to paint. His wife accuses him of being crazy. “A little, a little. But not enough.”

No Foolin’ is the tale of a woman with multiple broken engagements who finally falls in love with a man while on a trip to Europe with her parents. She marries him, lives in France, raises a son, becomes thoroughly French. The father dies in a plane crash, the Depression hits, she and son return to the U.S. but hate its constant change and lack of simplicity that Paris had.

Keep it Holy, the final story, follows Linny Mashek, a farm girl from Connecticut who comes to NYC to make hats. Knowing no one, she haunts the streets on Sundays, her day off. She visits the Met, the Natural History Museum, the Aquarium. Sunday mornings, her ritual comes to making coffee, eating a bit of cake and perhaps cooking (illegally!) some eggs in her room at the boarding house before heading out. She has her dinner at Werner’s cafeteria. “It was cheap, bright, good, clean. You got your tray, you selected your food, you served yourself.”

She had selected her food in silence, pointing. She had eaten in silence. She was out again in the February dusk. Suddenly, without warning, panic clutched her. You could live in New York, and go around all day, and have nothing happen. Not one thing. All day long she had talked to no one. From the moment of her awakening this morning until now, standing on the street corner in the early spring dusk, she had talked to no human being. Not one. She was a ghost, unreal, immaterial, drifting like fog through an indifferent city, mingling with the throng but no part of it. She was nothing. She was nobody.