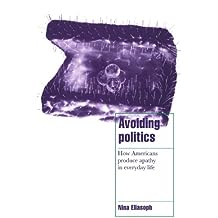 Extremely interesting sociological study of a handful of suburban groups in the late 1980s to understand why people avoid speaking about political issues. Eliasoph did her fieldwork over two and a half years, going to country and western dance halls, parent volunteer groups, anti-nuke activist meetings, and anti-drug volunteering. She shows the great lengths that each group goes to to avoid talking about the wider world and to avoid showing that they care about politics.

There’s a “spiral of silence” where people don’t express what could be an unpopular viewpoint to strangers, “sucking unpopular viewpoints out of circulation by making them embarrassing to hold publicly.” She points to other studies that show avoidance of disagreement is not universal. Israelis “use political talk the way Americans use talk about sports: to create common ground, with political disagreements only adding to the entertainment value.” This leads to political evaporation, and average Americans not knowing nearly enough about what’s going on in the world.

In group after group, she found conditions where as soon as discussion might spring up that would be enlightening, it was squashed. “One of the most important things that freely organized citizens’ groups can do that social service bureaucrats cannot do…is engage in imaginative, improvisational, creative political conversation.” But, it’s discouraged by the very fabric of engagement set up in these groups.

Discovered by way of the author’s great article about the rural whites.