As I’m sipping my coffee and perusing this morning’s SF Chronicle, I nearly spit out my drink after reaching this article on page 1 of the business section. 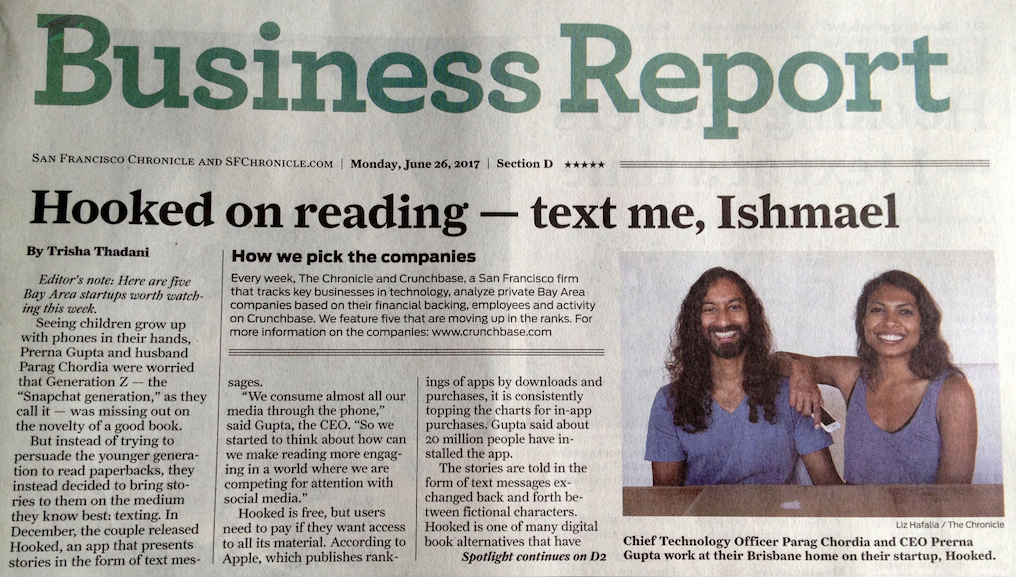 I’m a huge Melville fan, and every fiber in my body rejected the mangling of the headline. Maybe Thadani thought she was being clever by upgrading “Call me Ishmael” to “text me, Ishmael” but synapses in my brain roared in protest. Most egregious is the incorrect upgrade of “call me” to “text me.” In the book, Ishmael is inviting readers to call him by that name, not to phone him on a non-existent 1850s-era telephone. And why add a comma into this pseudo-modernized phrase? ARGH!

They had my attention, albeit with veins pulsating out of my forehead with distaste. Continuing to read the article, I think that perhaps I’ll be pacified, that this duo really is concerned with reading:

Seeing children grow up with phones in their hands, Prerna Gupta and husband Parag Chordia were worried that Generation Z — the “Snapchat generation,” as they call it — was missing out on the novelty of a good book.

Yes, I agree! This attention-starved generation must be eroding their ability to consume an old fashioned book when their focus is eviscerated with competing screens and bloops and beeps from their phones. Ah, but what’s this?

But instead of trying to persuade the younger generation to read paperbacks, they instead decided to bring stories to them on the medium they know best: texting. In December, the couple released Hooked, an app that presents stories in the form of text messages.

What the actual hell? This is by far one of the worst ideas for engaging people in the meaningful effort of reading that I’ve ever encountered. For one thing, I’m highly suspicious that using Chat to move a story forward through dialog is feasible. Can you imagine being on the receiving end of a text from Mr. Micawber?

The larger issue is that the books being spoon-fed through chat are obviously not high quality. No one is taking the time to carve up the classics into tiny morsels that fit into a text screen. Instead, they’re patting themselves on the back for getting teens to read this kind of “book”: 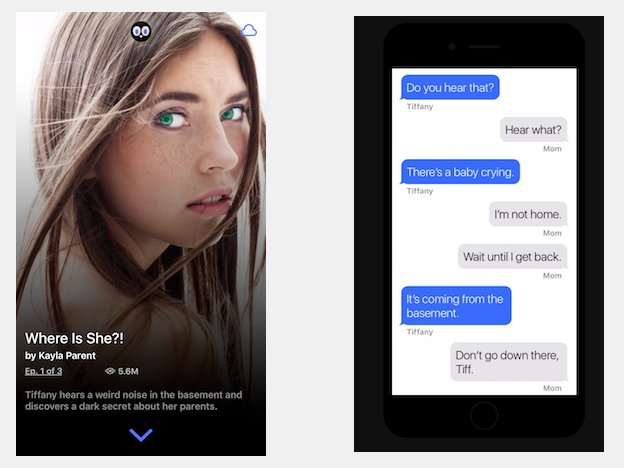 Slap me silly and burn my library card, I guess I’ll just give up reading printed books and start reading terrible YA fiction on my phone! But seriously, don’t Twitterbots take care of this already? Here’s one you can follow to have Joyce’s Ulysses tweeted at you. This account tweeted out Alice in Wonderland and Moby Dick. (This account randomizes text from Moby Dick if you’re more into serendipity.)

Here’s an idea for an app, feel free to steal it—an app that sends electric shocks into the hands of the phone-holder if they spend more than 10 minutes a day cradling it, cooing over it, completely losing the ability to interact with the real world. Get a library card, read a book.