A delightful travel book about Mexico by Sybille Bedford, soaking up as much of the New World post WWII before heading back to Europe. (At one point she considers sailing on a boat from Vera Cruz to Bordeaux that would allow her to take two small donkeys back to Normandy.)  Descriptions waft out of her book with the scent of freshly made tortillas, tinkling with the clink of ice in a glass of rum or tequila, sparkling with the frank heat of a noontime sun.

I sipped from this book carefully, not gobbling at the usual speed and keeping a separate tally of all the intriguing words she packed in. This week I’ve become a bit of a word connoisseur, sampling the sound of each as I strain toward writing my own. These are not words you find in today’s sparse and modern tomes:

Sybille and her friend “E.” (Esther Murphy Arthur) leave New York’s Grand Central and head south by train. I knew I was in for a treat early on when I encountered her acerbic retelling of the various availability of alcohol per state.

E. was told to wait until we have crossed the state line.  It is all very confusion. Oklahoma and Kansas are bone dry, that is everybody drinks like fishes. In Vermont you are rationed to two bottles of hard liquor a month. In Pennsylvania you cannot get a drink on Sunday; in Texas you may only drink at home, in Georgia only beer and light wines, in Ohio what and as much as you like but you have to buy it at the Post Office. Arizona and Nevada are wet but it is a criminal offence to give a drink to a Red Indian. In New York you cannot publicly consume anything on a Sunday morning but may have it sent up to an hotel bedroom. And nowhere, anywhere, in the Union can you buy, coax or order a drop on Election Day.

Her descriptions of the country are pure poetry, lyrical, flowing. Laziness overcomes me and instead of transcribing, I take the easy way out by screengrabbing Amazon’s copy (“Creole ladies went to Mass covered in diamonds leading pet leopards” and “women in crinolines sat at banquet among the flies at Vera Cruz” are you kidding me, perfect!): 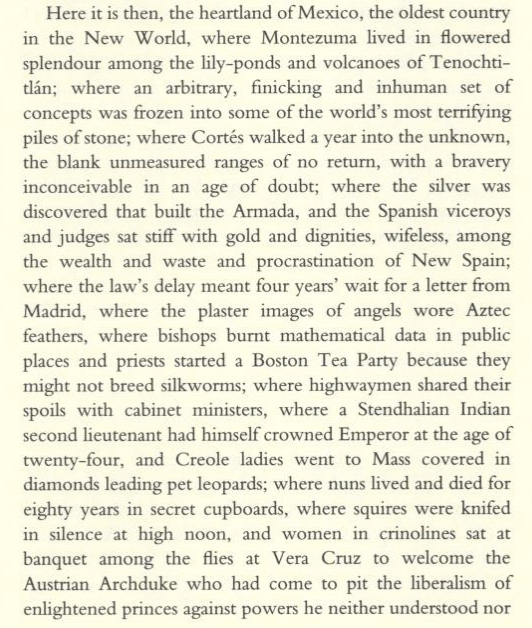 The pair spend weeks in Mexico City, (just “Mexico” to locals), exploring the streets and jumping on buses for gut-wrenching lurching toward other towns up and down mountains. Drinking is somewhat of a problem as bars aren’t open to women except certain hotel bars. But this isn’t so terrible, “this is not a good country to drink in: in daytime one does not want it at all, and at night one wants it too much.” The wines are horrible, but Sybille learns to swallow it “with a liberal admixture of water, like a man.”

Of the sights, there is much to see. “Everywhere. No need, no point, to plan and rush, only to stand, to stroll and stare; to connect. Not great beauty, not the perfect proportions, the slow-grown, well-grown balance, not the long-tended masterpiece of thought and form, the tight French gem, but the haphazard, the absurd, the overblown, the savage, the gruesome. The fantastic detail and the frightening vista; the exotically elegant; the vast, the far, the legendarily ancient.”

She buys a manual of conversation for Indian phrases. In a section headed Useful Words and Phrases, page one has:
‘Are you interested in death, Count?’
‘Yes, very much, your Excellency.’

E.’s cousin Anthony joins them midway through the trip, making friends with all the Mexican gentlemen and paving the way for an easier journey. Anthony is on vacation from his job in Baltimore and after a few weeks of fun, lolling about Don Otavio’s well-managed house reading and drinking and talking and exploring, Sybille broaches the fact that he must return in three weeks. “How can you bear it? Cellophane, television, the deep-freeze unit, getting and spending. The whole old bag of nothing.”

A book like this makes me want to travel again. Maybe.