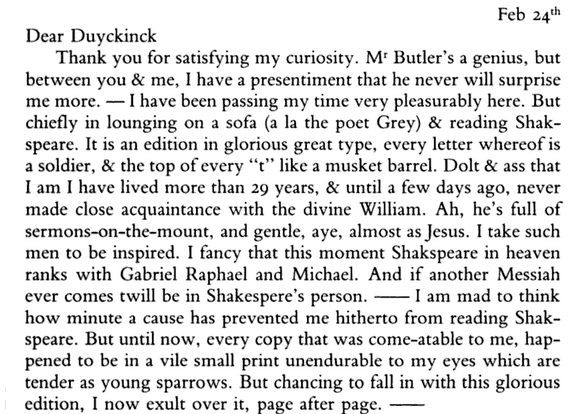 From the Northwestern University and Newberry Library 1988 edition of Moby-Dick, I gleaned very little new, except confirmation that Melville was reading Shakespeare in the months leading up to writing Moby. Letter above from 1849.

I also perused two volumes of Jay Leyda’s Melville Log, wherein he lays out every bit of Melville-miscellany and invites you to write your own biography. From these hundreds if pages I confirmed that he stopped in San Francisco between Oct 11-20, 1860.

Hendricks House 1952 edition has helpful notes, such as the fact that Chapter 25: Postscript was left out of the British edition since it’s a bit blasphemous about the king’s coronation, “a king’s head is solemnly oiled at his coronation, even as a head of salad.” Also, the Epilogue was unaccountably left out of the British edition, making a lot of reviewers feel that the ending was too hasty, unfinished.