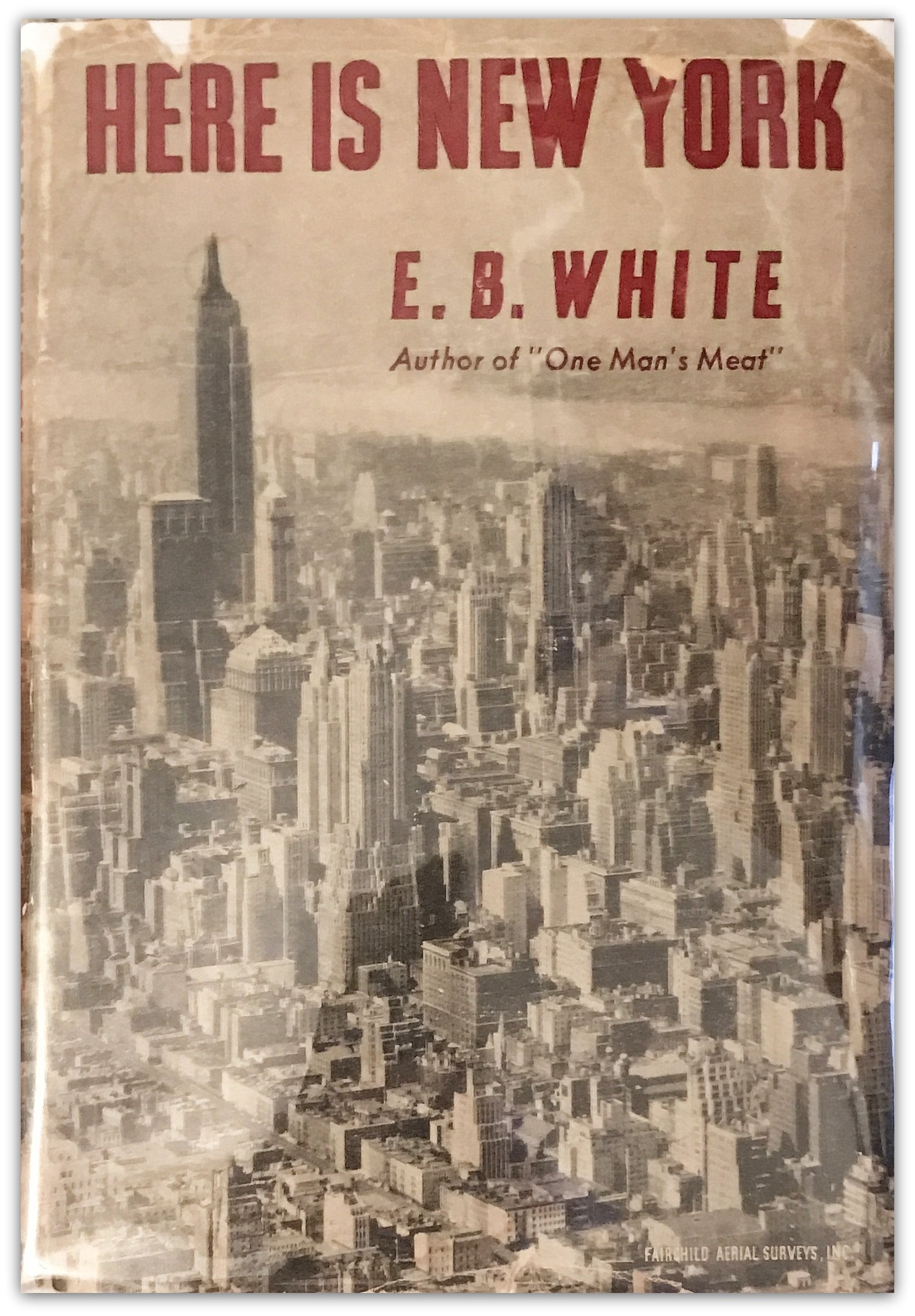 E.B. White’s 1948 love letter to NYC is just as readable 70 years later. It begins, “On any person who desires such queer prizes, New York will bestow the gift of loneliness and the gift of privacy.” He calls what the city gives its citizens “a dose of supplementary vitamin—the sense of belonging to something unique, cosmopolitan, mighty, and unparalleled.”

The three types of NYers are natives, commuters, and people who migrate there to live; of those, White calls the migrants the greatest, the cause of all the art and literature and energy of the city. He dismisses the commuters as a pack of locusts descending each day and not experiencing anything except the bus schedule and the closest place to get lunch from work.

NYC’s neighborhoods give much of its charm, and each small two or three block neighborhood is somewhat self-contained. No matter where you live, you’ll find within a block or two “a grocery store, a barbershop, a newsstand and shoeshine shack, an ice-coal-and-wood cellar (where you write your order on a pad outside as you walk by), a dry cleaner, a laundry, a delicatessen (beer and sandwiches delivered at any hour to your door), a flower shop, an undertaker’s parlor, a movie house, a radio-repair shop, a stationer, a haberdasher, a tailor, a drugstore, a garage, a tearoom, a saloon, a hardware store, a liquor store, a shoe-repair shop.”

This part struck me; remember, this is from 70 year ago:

New York has changed in tempo and in temper during the years I have known it. There is greater tension, increased irritability. You encounter it in many places, in many faces. The normal frustrations of modern life are here multiplied and amplified — a single run of a cross-town bus contains, for the driver, enough frustration and annoyance to carry him over the edge of sanity: the truck that blocks the only opening, the coin that slips to the floor, the question asked at the wrong moment. There is greater tension and there is greater speed. Taxis roll faster than they rolled ten years ago — and they were rolling fast then. Hackmen used to drive with nerve; now they sometimes seem to drive with desperation, toward the ultimate tip. On the West Side Highway, approaching the city, the motorist is swept along in a trance — a sort of fever of inescapable motion, goaded from behind, hemmed in on either side, a mere chip in a millrace.

Finally, it’s inevitable to recall 9/11 when he speaks of one change that no one talks about: “The city, for the first time in its long history, is destructible. A single flight of planes no bigger than a wedge of geese can quickly end this island fantasy, burn the towers, crumble the bridges, turn the underground passages into lethal chambers, cremate the millions. The intimation of mortality is part of New York now: in the sound of jets overhead, in the black headlines of the latest edition.”