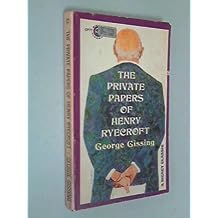 George Gissing almost had my complete admiration with this book of curmudgeonly wisdom from a writer retiring to a peaceful life in the countryside until he slapped me with a throwaway sexist comment near the end: “Little girls should be taught cooking and baking more assiduously than they are taught to read.” Yowza, Gissing. Up until that point we were mind-melding, but that was the record scratch that brought me up short. Perhaps I’m too sensitive; Woolf didn’t seem to mind that bit when she wrote her essay about his talents.

Before the casual, devastating sexism popped in, I was wholly loving this story of a retired writer who lucked into an inheritance from a friend that allowed him to spend his remaining years peacefully reading and thinking in the countryside, wandering on walks, watching the seasons, learning the names of the wildflowers he encountered, hating the sound of the human voice to disrupt his reveries.

His advice for letting the day’s news wait until later in the day is refreshing for those of us addicted to refreshing the internet/Twitter for the latest gossip: “Generally I leave [the newspaper] till I come back tired from my walk; it amuses me then to see what the noisy world is doing, what new self-torments men have discovered, what new forms of vain toil, what new occasions of peril and of strife. I grudge to give the first freshness of the morning mind to things so sad and foolish.” Later, he adds: “Every day the world grows noisier; I, for one, will have no part in that increasing clamour, and, were it only by my silence, I confer a boon on all.”

He frequently reflects on his earlier toils, making his living by his pen, dodging poverty by the skin of his teeth. Mostly, he did it alone. “I never belonged to any cluster; I shrank from casual acquaintance, and, through the grim years, had but one friend with whom I held converse. It was never my instinct to look for help, to seek favour for advancement; whatever step I gained was gained by my own strength.”

On living alone in cheap lodgings: “I was easily satisfied; I wanted only a little walled space in which I could seclude myself, free from external annoyance… A door that locked, a fire in winter, a pipe of tobacco–these were things essential; and, granted these, I have been richly contented in the squalidest garret.”

My kinship with Gissing grew even more with his delight in reading. “To the end I shall be reading– and forgetting. Ah, that’s the worst of it! Had I at command all the knowledge I have at any time possessed, I might call myself a learned man. Nothing surely is so bad for the memory as long-enduring worry, agitation, fear. I cannot preserve more than a few fragments of what I read, yet read I shall, persistently, rejoicingly. Would I gather erudition for a future life?  Indeed, it no longer troubles me that I forget. I have the happiness of the passing moment, and what more can mortal ask?”

He also hated the sounds of the city. “Every morning when I awake, I thank heaven for silence… I remember the London days when sleep was broken by clash and clang, by roar and shriek, and when my first sense on returning to consciousness was hatred of the life about me. Noises of wood and metal, clattering of wheels, banging of implements, jangling of bells–all such things are bad enough, but worse still is the clamorous human voice. Nothing on earth is more irritating to me than a bellow or scream of idiot mirth, nothing more hateful than a shout or yell of brutal anger. Were it possible, I would never again hear the utterance of a human tongue, save from those few who are dear to me.”

Most houses were quarrelsome, but his was not. “What proportion of the letters delivered any morning would be found to be written in displeasure, in petulance, in wrath? The postbag shrieks insults or bursts with suppressed malice.”

Thinking vs. reading: “I read much less than I used to do; I think much more. Yet what is the use of thought which can no longer serve to direct life? Better, perhaps, to read and read incessantly, losing one’s futile self in the activity of other minds.”

More on reading: “How the mood for a book sometimes rushes upon one, either one knows not why, or in consequence, perhaps, of some most trifling suggestion… often it happens that the book which comes to mind could only be procured with trouble and delay; I breathe regretfully and put aside the thought. Ah! the books that one will never read again. They gave delight, perchance something more; they left a perfume in the memory; but life has passed them by for ever. I have but to muse, and one after another they rise before me. Books gentle and quieting; books noble and inspiring; books that well merit to be pored over, not once but many a time. Yet never again shall I hold them in my hand; the years fly by too quickly, and are too few. Perhaps when I lie waiting for the end, some of those lost books will come  into my wandering thoughts, and I shall remember them as friends to whom I owed a kindness– friends passed upon the way.  What regret in that last farewell!”

On coming to grips with old age: “As I walked today in the golden sunlight–this warm, still day on the far verge of autumn–there suddenly came to me a thought which checked my step, and for the moment half bewildered me. I said to myself: My life is over. Surely I ought to have been aware of that simple fact; certainly it has made part of my meditation, has often coloured my mood; but the thing had never definitely shaped itself, ready in words for the tongue. My life is over. I uttered the sentence once or twice, that my ear might test its truth.”