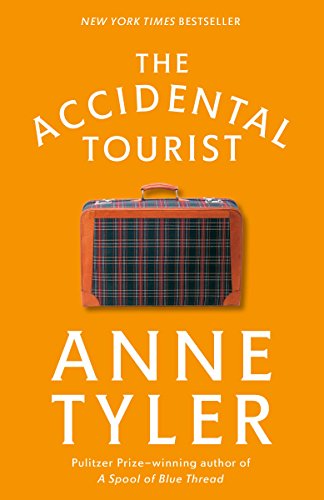 Every time I flash this book around someone tells me that it’s also a movie. It’s curious because this isn’t the best of her work that I’ve encountered, but something about it triggered a screen adaptation. Macon is a stodgy forty-something man separated from his wife after the freak murder of their son in a botched robbery. He’s addicted to systems, and when Sarah leaves him, he decides to do a bunch of weird things like shuffle around the bath with his laundry while he’s showering, sewing his sheets into a bizarre “envelope” so it’s fresh every day. He changes the dryer exhaust tube so the cat can use it to enter and exit the basement and decides to use the coal chute for the dog’s kibble. He works from home writing guidebooks for traveling businessmen to make their stay as much like being at home as possible. Rushing off to get tips for a new edition, he parks his dog in a kennel and meets Muriel, who pursues him relentlessly. They take up a relationship and Macon helps raise her son Alexander, then Sarah enters the picture again. There’s a weird trip to Paris at the end where Muriel books a ticket on the same flight, but Macon’s back goes out and Sarah comes over but he ends up with Muriel in the end?