Finally, a great book about introverts vs extroverts! Susan Cain produced a well-researched and well-written tome that you can use to knock sense into people in your overly stimulated life. Her book contains advice for people who are overly reliant on extroverts in their organization and pummels us with scientific study after study that show the benefits of having introverted leaders.

She braves a four-day Tony Robbins seminar (where the attendees actually walk across a 10 ft bed of hot coals), attends church at the overwhelming Saddleback evangelical megachurch in California, goes trolling around the Harvard Business School looking for quiet people, and layers in famous introverts who got things done like Rosa Parks, Ghandi, Eleanor Roosevelt. Nothing gets my blood pumping like a good Proust quote, too, where he called the moments of unity between reader and writer “that fruitful miracle of communication in the midst of solitude”(from Marcel Proust on Reading Ruskin).

Group brainstorming doesn’t work: One of the earliest studies to debunk the brainstorming myth was Marvin Dunnette’s 1963 “The Effect of Group Participation on Brainstorming Effectiveness for Two Industrial Samples” in the Journal of Applied Psychology. He asked 48 scientists and 48 advertising executives at 3M to participate in both group and solo brainstorming processes, expecting that the executives would benefit from the group process but the scientists would not. Nope. 23 out of 24 of the groups produced fewer ideas than when they worked on their own, and the solo results were of higher quality. “Since then, some forty years of research has reached the same startling conclusion. Studies have shown that performance gets worse as group size increases.” Organizational psychologist Adrian Furnham writes the “evidence from science suggests that business people must be insane to use brainstorming groups. If you have talented and motivated people, they should be encouraged to work alone when creativity or efficiency is the highest priority.”

Groups are like mind-altering substances. This was the most eye-popping thing I learned. A 2005 Emory University study by Gregory Berns took snapshots of volunteers’ brains as they either conformed or broke with group opinion. Playing alone, they got a spacial recognition question wrong only 14% of the time. Playing with a group where members gave unanimously wrong answers, they agreed with the group 41% of the time. Berns study showed heightened activity in the area of the brain associated with visual and spacial perception, meaning that the groupthink actually changed the individual’s perception. You’re not just going along with the group, but you actually see things the way that the group wrongly described. The implications for jury trials are enormous. More details in the NYT writeup or in Berns’ book Iconoclast: A Neuroscientist Reveals How to Think Differently.

On the need for quiet, private workspaces: Cain cites the example from the Coding War Games where the top performing coders worked for companies that gave their employees the most privacy, personal space, control over physical environment and freedom from interruption. Also lists a “mountain of other recent data on open-plan offices”: 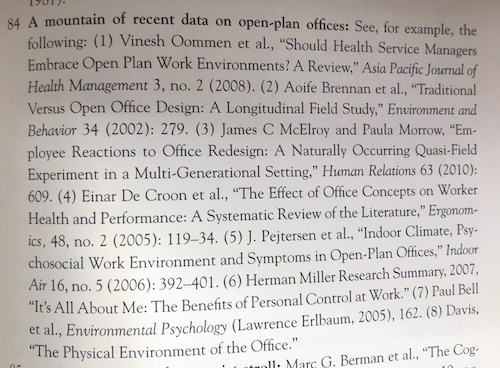 What about public speaking? While there is hope for us quiet types if we are tapped to speak about a subject we’re deeply interested in, Cain notes how this is usually an impossibility at work and it’s harder for introverts ” who have trouble projecting artificial enthusiasm.”

Other random item: IBM’s sales force in the 1950s started each work day by singing “Selling IBM” to the tune of Singin’ in the Rain: