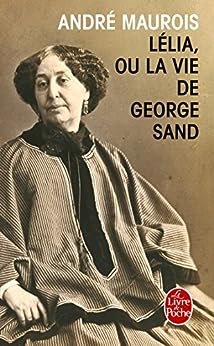 While reading Grace Hartigan’s journals wherein she swoons over reading this biography of George Sand, I realized I knew shamefully little about this foremother, this literary giant. I resolved to remedy that by going to the source that Hartigan was clutching in the 1950s, this by Maurois. Hundreds of pages later, I’m not certain I know George (Aurore Dupin -> Madame Dudevant -> George Sand) any better. Certainly her life was filled with passion, as Maurois describes her lurching from one love affair to the next, separating from her husband and desperately seeking a romantic attachment that fulfilled her.

She had fierce friendships that went down in flames, such as that of Lizst’s pretty girlfriend Marie d’Agoult, the entire breakup letter printed here in full. She provided Chopin with a loving home for several years and he chose the side of her daughter Solange against George. (Maurois claims that without Sand’s support and encouragement, Chopin may never have written his best work). She knew everyone: Flaubert, Balzac, Hugo, the Dumas family. Some of them remained loyal to the end.

There are some hilarious bits, such as her written up contract to try and bring her husband around to providing her what she needed (eight formal “Articles” that mostly laid out how he needed to educate himself, read books and provide her with his opinions of them).

Maurois’ prose is quite eloquent: “The passage of time and the accidents of life wash ceaselessly about our feet many strangers, some of whom, thus wrecked upon the coast of our own lies, remain there. New deposits of friendship take the place of those sucked backward by the ebb.”