Meticulously researched and expertly written, weaving threads of history (WW2, Depression, WPA projects) into the stories of these five amazing artists. A beefy 700+ pages (with an additional 100+ pages of notes) is necessary to layer in all the stories, to cover what Lee’s life was like before-during-after her time with Pollock, to outline Elaine’s scintillating intellectual climb to the top of the art critic circuit in tandem with her own artistic progress, to detail Grace’s decision to give up her son to focus on art and her close relationship with Frank O’Hara, to show how Joan and Helen’s privileged upbringing was something they both rebelled against and benefited from. It’s a nonstop whirlwind of a read, details of a time when poets and painters got together in cafes to talk about art as if it were all that mattered. In fact, it remains all that matters. It was a time when a supportive community of artists encouraged and inspired and egged each other on, unpolluted by what art would become—fashion. Gabriel also tries to make the case that it was a time before frothy misogyny shut women out completely, but Clem Greenberg’s comments denigrating women artists belies this point. Highly recommended read if you want to submerge yourself completely in the 1950s Abstract Expressionist world of these women.

A random assortment of tidbits I picked up:

* WPA project funding artists threatened by members of Congress who saw no value in work made by “Hobohemians.”

* Mondrian thought his eyes were so powerful (trained in the art of really seeing) that he kept them downcast so he wouldn’t look directly at people.

* Bonwit Teller windows keep coming up for me—Lynn Hershman’s 1976 renditions bursting out of the window. In this book, I learned that Dali crashed through a Bonwit Teller window in 1939 in a bathtub full of water in a dispute over changes made to his window. (And Jasper Johns designed Tiffany’s windows with Bob Rauschenberg in 1955.)

* Peggy Guggenheim treated Lee Krasner horribly, inviting her over for dinner and then insisting that Lee cook for the 50 guests. Surprise! But her monthly stipend did keep Jackson Pollock painting through the lean times.

* Potential cause of increased sexism I hadn’t ever considered: war as incubator for misogyny; “At the end of the war, not only had veterans returned more sexually experienced… but living those many years in a community of men, in which the women they encountered were often viewed as mere sex objects, had changed them.”

* NYU’s quest to consume all of the Village began decades ago,  century-old buildings torn down and replaced by vacant lots or NYU buildings.

This is eerily relevant to today:

It is difficult to comprehend the emotional, social, political, religious, and artistic tumult of 1945. How people could have absorbed such cataclysmic changes, coming one after the other, over a period of just a few months.

Also this, from Judith Malina’s diary: “Everyone says, ‘I can’t stand reading the newspapers. I dare not listen to the radio.” The news was pure madness.

* Pollock’s skyrocketing success is shown as a harbinger of doom, he describes himself as a clam without a shell and that people don’t look at you the same anymore. A tidal wave of mail arrived, strangers showed up to meet him. Celebrity was too much of a price to pay.

* The art market changed in 1955 when the U.S. tax code allowed deductions on art purchases made with the intent to donate to a museum. In 1956, Lee’s insistence on quadrupling prices on now dead Pollock’s work opened the floodgates for huge prices. Gabriel contends that that single sale (of Pollock’s first post-death piece to MOMA for $30k) rest the entire market for modern American work. Galleries took 30%, and artists were still making more money than they’d ever seen, resulting in the usual excesses and depressions. Paul Brach said 1957 was “the last year that artists made other artists’ reputations.” After that, it was done by the machine of the art establishment.

* The list of speakers at the Club is bananas: Joseph Campbell, Hannah Arendt, John Cage.

* I’m left with scores of people to research further, like Bunny Lang, Zarah Leander. And check out this amazing photo of Lee in 1972: 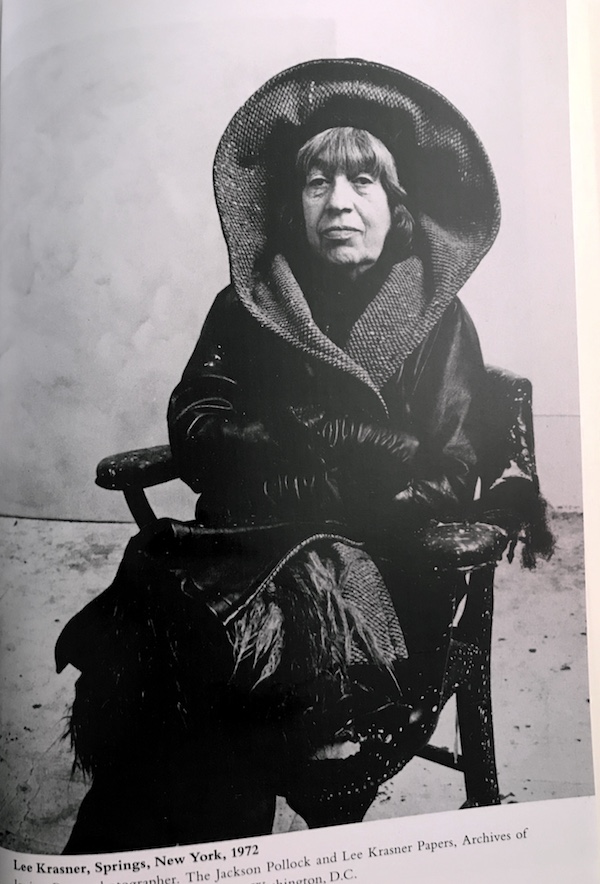