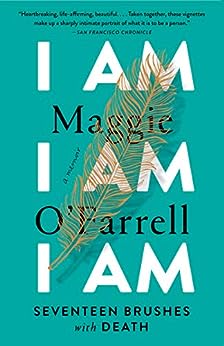 This might be a record for the shortest time between hearing about a book and finishing it—my sister recommended this book to me this afternoon as I was about to head to the library, so I grabbed a copy and devoured it in one gulp. Beautiful memoir about the various scrapes and near-death experiences Maggie and her children have endured. I was especially pleased by the pacing of the stories—they’re not told chronologically (boring!) but instead layered in a way that draws you in. First, the story of almost being strangled as an 18-year-old hiking near a lake (the guy ends up killing a different woman a few days later). Then hints of a childhood disease that was devastating, but she leaves that mega-story for the penultimate. The last tale is one about her daughter, seemingly allergic to everything, being rushed to a hospital in anaphylactic shock. Also a frank story about a miscarriage (they allowed her to walk away from the clinic with a dead body inside her, told her it could pass naturally!) and how common those are but mysterious because no one talks of them.