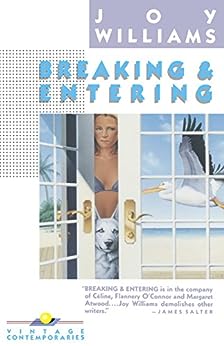 A gorgeously strange melancholy novel from Joy Williams, pub’d in 1988. I’d only read her short stories before and was amazed to find myself submerged in this full length tale; at first, the chapters seemed like short stories in themselves, only with the characters continuing on, and then I realized belatedly I was reading a novel. It’s a dreamy, unreal story with an epigram from André Breton before the second half, “It is living and ceasing to live that are imaginary solutions. Existence is elsewhere.”

Liberty and Willie are a married couple who float through life, breaking into houses in Florida just to see what other people’s lives are like. Liberty rescued a big white dog, Clem, from a mailbox, and he follows her around freaking out other people. They befriend a security guard who assumes they’re just guests of the people who own the house. Eventually they leave this house, head back to the one they’re renting, back to the town where they’re somewhat known. Drunk Charlie is in love with Liberty but she’s too far gone on Willie to care. Willie takes off for a week or so, calls Liberty to tell her to jump into the tide at a certain time and she’ll be swept to the key where he is. She obeys, they end up at a house of a body-building septuagenarian rich woman who worms their origin story out of them (met as kids, Liberty’s parents abandoned her to be brought up by Willie’s parents, pregnant at 15, suicide pact gone awry, no more babies possible). Liberty leaves Willie there and floats back to their headquarters, ends up talking to Charlie at the bar and then he’s stabbed by her neighbor. They drive through a car wash to try and wash the pee (the neighbor’s) off the car and this is possibly where Charlie dies, but it’s the end so who knows.

“She remembered feeling once that anything was possible. The sky was bright and blue and she was walking fast and could go anywhere. But that had been a moment years ago, and since that moment she had felt that her life was like someone else’s garden she had wandered into, something she could care for or not, like one did another’s garden.”

“After she stopped wailing, I lingered for a moment and listened to the wind in the trees. They were whispering something that at the time made an enormous deal of sense. Never have I heard the susurrus of branches so clearly.”