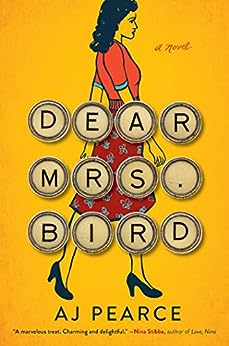 A light palate cleanser to burn through quickly, story of wartime London complete with air raids, bombings, soldiers running off with nurses, men in uniform making ladies swoon. A bit on the sentimental side but not too maudlin. The narrator, Emmy, takes a job answering correspondence for an advice column but doesn’t like Mrs. Bird’s strict rules around what’s acceptable or not to answer. Emmy takes it upon herself to answer several letters, doling out comfort and advice to those who would be otherwise rejected by Mrs. Bird. She meets the half-brother of her boss, a soldier on leave named Charles, and has a night of dancing with him before starting correspondence. She lives with her pal Bunty, who becomes engaged to William, but tragedy strikes at their engagement party when bombers hit and Bill dies. This is where it goes off the rails, Bunty decides it’s Emmy’s fault that Bill dies, refuses to speak to her, ends up writing a letter to the magazine that Emmy responds to behind Bird’s back which of course draws significant support from the audience, resulting in a dramatic Hollywood moment of the mailboy bringing up the bag of letters from people, skyrocketing subscription numbers, and Bunty showing up to plead for Emmy’s job.