I came across this book while trying to figure out Frank O’Hara’s reference to the poet’s walk in San Francisco that he didn’t want to be a part of and I am utterly delighted by my trip down the rabbit hole. Margot Patterson Doss is a poet in her own right, tramping around 1960s SF with her husband and 4 sons in tow, “a family ambulant beyond the call of duty.” Anyone who references Shakespeare’s will (the second best bed) and Kafka’s The Castle in relation to SF’s financial district earns bonus points with me. (“Downtown offices are usually as inaccessible to the casual walker as the castle was for Kafka, but each year there is an office and industry tour sponsored by the auxiliary of the San Francisco Senior Center which magically opens flossy doors.”) She loathes “the tragedy that is Van Ness” where walkers meet a barricade and bemoans the freeway that marked the bitter end of Market St. near the ferry building. She was not a fan of cars (“today’s bumper-to-bumper harassment”) and gives a cheer for the 170 daily ferry trips that once crowded the building until the bridges showed up to end most ferry services.

Doss cautions women about certain walks that will get her catcalled and calls the Marina the spot where the “leer-while-you-steer car-poolers from Marin” have found the prettiest ladies.

Her first paragraphs usher in the tone:

Among American cities, San Francisco is that rarity, an exciting town to walk. Indeed, as more people are discovering, now that walking as a noncompetitive sport is fashionable, it is the only way to truly know her.

The hasty motorist may taste, between his home and office, a tantalizing sample of her charms, but it is the man on foot who feasts on this rich and saucy city.

The fare could vary daily all his life. The city offers infinite choices: great walks and good walks, lusty walks and sad, hiker’s walks, children’s walks, sea walks, secret silent walks known only to the aficionado, and the noisy promenade of the gaudy, the greedy, the cheap, the gauche and the rest of us. Or if he chooses, a walker can go quietly through dell and high water with the birdwatchers and still never leave the city.

She covers so much about this city, some gone (Sutro Castle turned into Sutro Tower, Playland turned into Safeway, Sutro Baths still standing) and some unknown to me (the Ingleside Sundial, Edgewood Avenue & Farnsworth Lane, Piedmont Street with its 1850s farmhouse at number 11 once part of a pigfarm but moved uphill away from sand fleas in 1890), some changed but worth exploring (Macondray Lane on Russian Hill). The list of bookstores no longer on Clement Street breaks my heart (Porpoise, Jabberwock, El Dorado, The Library—a bookstore on the 900 block not to be confused with the other establishment on the block called The Library which looked like a bookstore from the outside but was “an unusual pub in which strangers can meet by telephone.”)

Some things never change, like the idiots who need rescue from Land’s End (“every year the irresistible music of challenge lures another overbold climber or two out onto the crumbling cliffs. The lucky ones get pulled off by helicopter.”)

McAllister Street is called “the Fibber McGee’s closet of San Francisco” and in this walk she bemoans a “hideous interchange which feeds traffic into the city from a freeway.” Doss waxes poetic about McLaren Park: “the moods and mysteries of the living land. The sound of surging tides in spring. The dry whispering of dead leaves in fall. Trees laid open like a shattered door. The spider’s web, dew-flecked, unbroken. The vision of what the West offered its pioneers. And if you look deeply enough, along this little-traveled way, your own heart, city scarred.”

Her description of Sutro Baths bears copying in full since it is no longer: “the kookiest, flukiest, and… spookiest, walk in San Francisco,” calling it a “McAllister Street under glass” (whatever that means!), mentioning the “grabby row of coin-operated machines, all with their slots yawning greedily…” 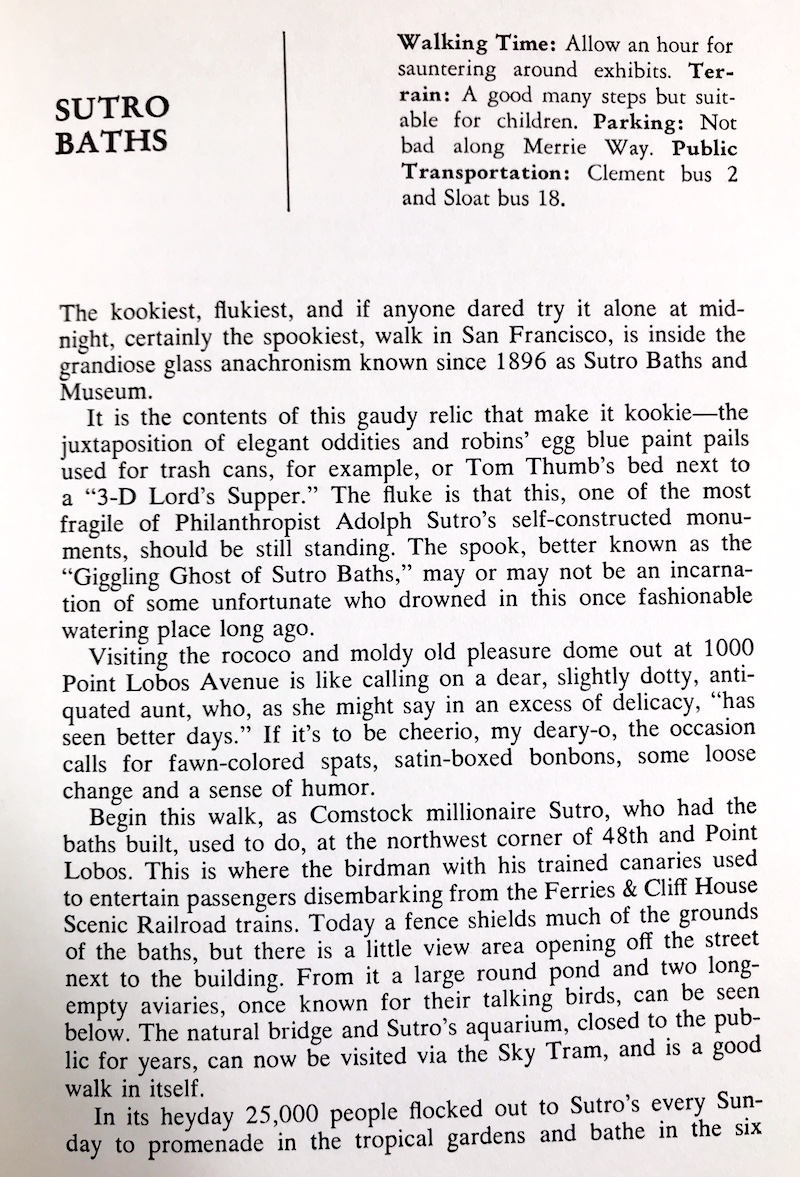 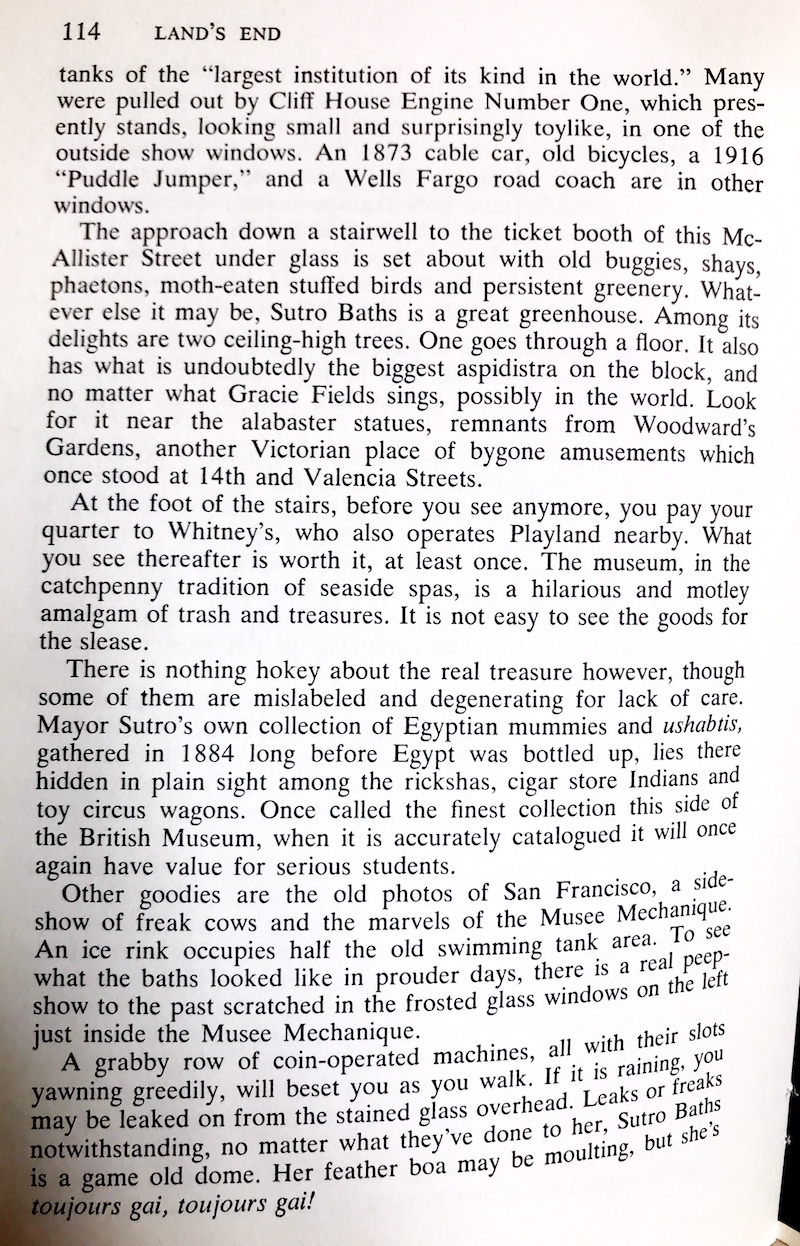