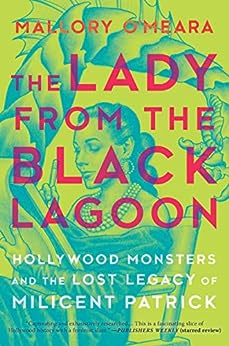 I can’t be bothered to even rage read this piece of garbage masquerading as a book. It’s a gussied up Wikipedia entry from a millennial who is shocked to discover that research on an unknown figure must be done offline, in something called…. libraries?!

If you’re looking for a great example of how today’s Youth are blowhards puffing themselves up to be more than they are, read this book. It’s almost a caricature. O’Meara tries to convince you that she’s an old hat in the horror film genre, that she’s racked up SUCH experience (oh she’s only 25 years old when setting out to write this), she’s so dedicated to the quest that she gets her 18th tattoo of her subject Milicent posed in front of the creature she designed. Thanks to her “full-time job as a genre film producer” (she has 2 credits on IMDB), she’s been able to afford these marks.

I knew I had a stinking pile of trash on my hands when I got to her paragraph summarizing the 1906 earthquake in SF saying that the “roaring arts culture of San Francisco never fully recovered from this blow and the creative torch of the West was ultimately passed down to Los Angeles, a city not on a fault line.” She’s not being funny, she’s actually nervous that she’s summoning an earthquake by writing this.

We get pages and pages of filler explaining who William Randolph Hearst was, and who Julia Morgan was, all ostensibly in service of explaining that Milicent’s father helped supervise the building of San Simeon. Naturally, all this is hidden from the author because she had simply been googling “Milicent Patrick” and assuming that was her name. A friend had to help her hone her search skills and they discovered Milicent Patrick Trent was who they were looking for. “I almost jumped out of my chair. That’s why I was having such a hard time finding her; she must have gotten married and gone by a different name later in life!” Let’s excuse the 25-year-old non-writer’s terrible “almost jumped out of my chair” and concentrate on the rocks-for-brains research skills that held her back before this moment.

Skimming the rest, I see that she inserts herself heavily into the story throughout. She moves to LA to mooch on someone’s couch, bitches about not getting access to Disney’s history department at a party and meets someone there, blah blah blah. Her final act is to drive up to the “San Francisco Bay” because that’s where Milicent’s ashes were scattered after she died in 1998.

Who greenlit this book?