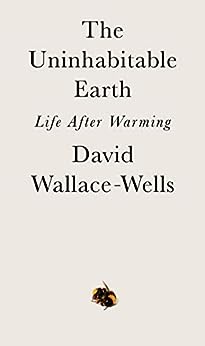 If you’re looking for a cheerful read to buoy your spirits as late capitalism rages all around you, this is not the book. Instead, it’s an important aggregation of all the mind-numbing stats about ongoing catastrophic climate change presented in a lyrical way. This is no rubber mallet hammering stats into your brain, but poetic writing that makes you look again at those topics you most want to avoid in an effort of self preservation.

William Vollman’s Carbon Ideologies is referenced after Wallace-Wells notes a state of “half-ignorance and half-indifference is a much more pervasive climate sickness than true denial or true fatalism.” Vollman writes from a devastated future: “Of course we did it to ourselves; we had always been intellectually lazy, and the less asked of us, the less we had to say… We all lived for money, and that is what we died for.”

Even before I got to his section about our cognitive biases I appreciated the way he was giving us the worst case scenario first, as a way of anchoring our perspective. In the Crisis Capitalism chapter, he lays out the many ways we’re hindered from mentally grappling with this issue: anchoring, the ambiguity effect, anthropocentric thinking, automation bias, bystander effect, confirmation bias, default effect, status quo bias, endowment effect, overconfidence, optimism bias, AND pessimism bias.