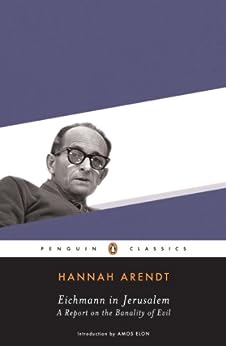 We’re not meant to feel sorry for Eichmann in Arendt’s writeup of the 1960 show trial that followed after Israel kidnapped Eichmann hiding in a nest of Nazis in Argentina. And yet, he is pathetic. The trial and Arendt’s book expose him as the worst kind of following-orders-without-thinking cog in the Nazi wheel that obliterated millions of Jews in the Holocaust. He was a simpleton who couldn’t think beyond catch-phrases, perfect for manipulation by grander, eviler minds. Himmler coined slogans that stuck into Eichmann’s brain, being told that he was involved in something grand, historic, instead of focusing on the actual murdering that was going on. He’s not a monster, but a dimwitted clown.

Arendt calls out contemporary (1960s) Germany for its self-deception and believing in the lies that spewed forth from the regime. She also pinpoints another group for guilt: those Jewish leaders who assiduously took notes of names and property to ensure the smoothest of handovers to the Nazis, leading their lambs to slaughter.

One of the “few great [moments] in the whole trial,” according to Arendt, is when Eichmann’s defense lawyer declared the accused innocent of charges bearing on his responsibility for “the collection of skeletons, sterilizations, killings by gas, and similar medical matters,” being interrupted by one of the judges to ask if a slip of the tongue was made when describing these killings as medical matters. Nope, Servatius says, “It was indeed a medical matter, since it was prepared by physicians; it was a matter of killing, and killing, too, is a medical matter.” Jaw on floor, this will serve me well when evaluating whether the current state of the U.S. has reached the depths of depravity (not yet).

Strange attitudes of countries willing to exterminate other country’s Jews but not their own—Arendt provides examples of this in Germany and France. Eichmann himself feels he was a friend to the Jew, attempting to find refuge for them in the first years before buckling down to provide the final solution.

The actual phrase “banality of evil” is used only once, as the last words of the book before the epilogue, describing Eichmann’s last acts before he was executed when he contradicted himself and used clichés, Arendt calls it “the grotesque silliness of his last words.” It’s an instructive read for any student of history, as well as any person aware of current events in the U.S.