I like how Lynn Hudson attempts to demystify Mary Ellen Pleasant by laying out all the rumors and sketchy biographies that have been generated about her. She’s been called a witch, voodoo queen, a madam, a mammy, almost everything but what she seemed to actually be—a successful black businesswoman in  19th century San Francisco.

Stories swirl around about how she got her initial seed month, supposedly $30k from her late husband to help abolitionist causes. She did arrive in California with a lot of capital, then set about making it work for herself. She seemed to hide publicly in the role of servant at white homes, but she actually owned the homes themselves, like the one on Octavia Street: 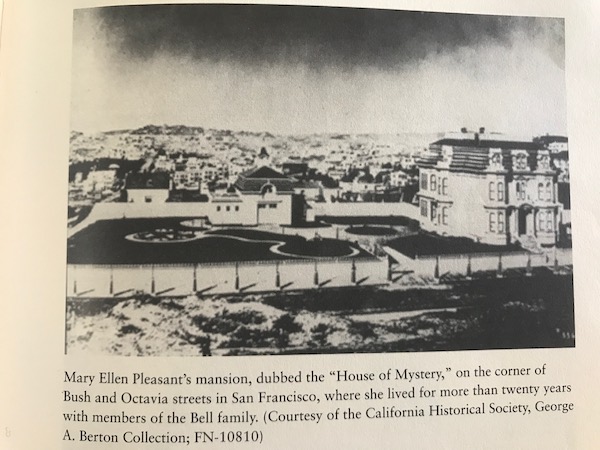 She donated money to John Brown’s abolitionist cause before the raid at Harper’s Ferry and has “friend of John Brown” on her Napa headstone. She earned tons of money cooking, operating boardinghouses and laundromats. She speculated in stocks for the silver mines and loaned money at interest. She bought and sold real estate. Luckily for us, she was also involved in several court cases, which gives us the best and most real document of her, including a suit which forced street cars to start picking up non-whites, and a divorce suit where dirty underwear had a starring role.