I’ve been authorizing myself small sips of this for the last few weeks in order to prolong the delight and maximize my full attention which tends to wander off to various spots of further discovery. I loved the explorations Hockney did with photographs in the 1980s, railing against the flatness of normal photographs and trying to get to a true vision of how we look at things. He would assemble collages of the resulting images, layering them to recreate the way we glimpse at images. Explaining his process to Weschler about taking dozens of photos of  location then having the rolls developed at a local one-hour processing spot, he had to convince them to print all the photos and would still get “wonderful standardized notices back with my batches of prints patiently explaining what I am doing wrong, how I should try to center the camera on the subject, focus on the foreground, and so forth.”

Arguably one of his best examples now sits in the Getty collection: 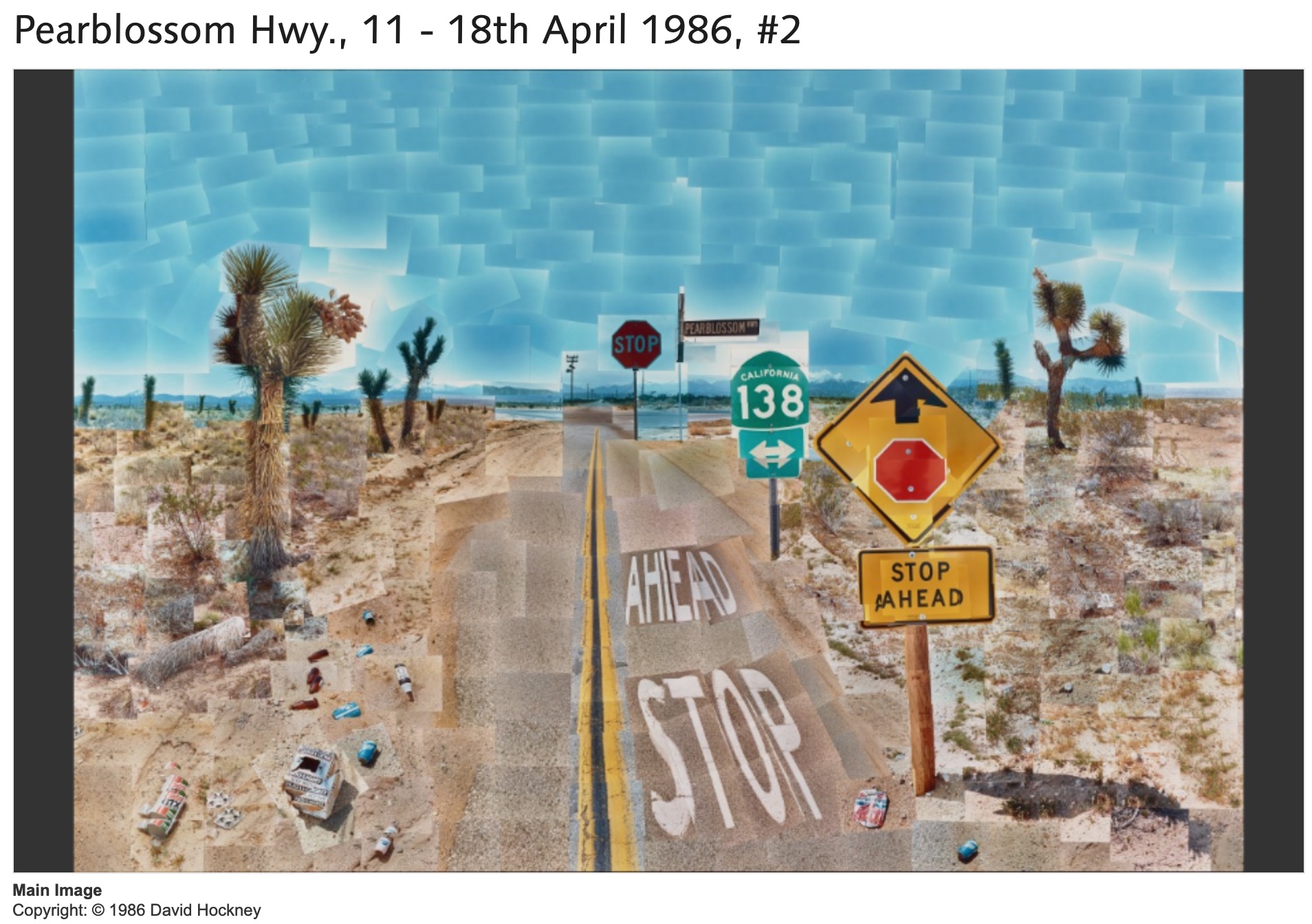 People criticized the painter for his work with photographs saying they’re not art, and I love Hockney’s response: “I couldn’t care less in a sense whether they are art or not. It’s not up to me to say, and maybe it’s not up to him either. It’s certainly interesting where they’re leading and where they’ve led, and you don’t stop in the middle of it all because, you know, ‘Gee, I’m not sure if this is art anymore.'” Later he notes, “If art isn’t playful, it’s nothing. Without play, we wouldn’t be anywhere. Play is incredibly important; it’s deeply serious as well.”

He begins to lose his hearing before his 50th birthday and revels in his new hearing aids which he got in bright mismatched colors of red and blue. “The moment I put it on, it was like a big muffler had been taken off my head.” When people notice the aids they ask if he has a hearing problem and he says “Well I used to but I don’t know.”

The really interesting sections of this book dive into Hockney’s investigation into how artists worked in the 15th century, more specifically what type of optical aids they used. He begins to collect images that show how portraits were a bit awkward up until 1425 when something shifted (concave mirrors, then lenses, camera lucidas, etc.), all the way up until photography used chemicals to stamp the image on paper, and then a return to awkwardness/cubism as a critique of photography and the entire lens-based tradition. As he gathers more and more evidence of this, Hockney faxes his handwritten findings on a nightly basis, never having learned to type. All of this means I’m probably going to have to dive deep into his book about the matter next, Secret knowledge: rediscovering the lost techniques of the old masters.