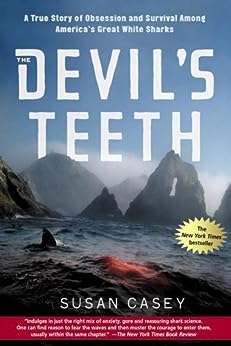 Now that I’ve re-read this book, I’ll stop recommending it. While some bits were of interest, Casey writes herself into a starring role in the second half, forcing drama into the book with a storm and swells and a boat that gets unmoored and sails away unmanned. She also shows an extreme lack of curiosity about any of the women interning on the island, giving speaking roles and interviewing only the men, mostly Peter Pyle and Scot Anderson. Casey’s contribution is to inadvertently get Pyle fired from his job because of the scheme he cooked up to have her float off the island in a boat in order to participate in the shark season.

I read this 14 years ago, long before visiting the islands and before getting into birding, and picked it up again as a primer for this weekend’s jaunt out to the Farallones. Nothing of real import was gained by the re-read, just a reminder that it’s 27 miles off the coast of SF and yet part of the city, teeming with great white sharks and birds and seals and whales, and that the USS Independence aircraft carrier was scuttled nearby in 1955 filled to the brim with extra nuclear waste.