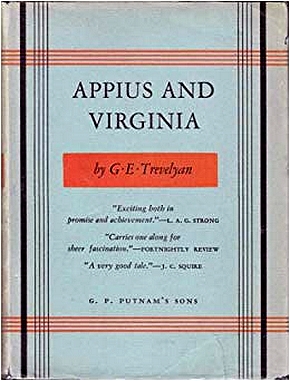 Absolute bananas book (pub’d 1933) by G. E. (Gertrude Eileen) Trevelyan. Virginia, a 40-something spinster, buys a baby orangutan who she raises as a boy, Appius. She retires to the country and spends the next decade painstakingly teaching him to speak and read, keeping him cooped up in the nursery instead of swinging from the tree tops, restricting him in little boy clothing. One afternoon he does escape into the trees, “one glorious half-hour he lived his own life, his own swinging rhythmical life, high up out of their reach among the leaves and sunbeams, and then had been forced to come back.” He likes to listen to the murmur of her voice although he understands little of it . “Reading bored him, but by now he knew most of the sentences in the book. So long as he could say the right one for each sentence mama was satisfied, he knew, and would go on talking for a long time, hum-hum in the distance, whilst he could nod at the flames or wallow drowsily in the warm, comfortable world deep down inside him.” She admits at one point that she undertook this experiment mostly so she could have someone to talk to, since everyone else thought she was mad.

Trevelyan writes beautifully and shows us the difference in comprehension as Appius watches a thunderstorm from his window:

Dazzle, giddiness. Blackness, brightness. Round and round, down and down.

In the end, Virginia falls to the floor and dies after restraining herself from shooting Appius when he seemed to be getting out of control. Now what will happen to the ape? Neglected Books calls it one of “the most powerful stories about loneliness ever written.”