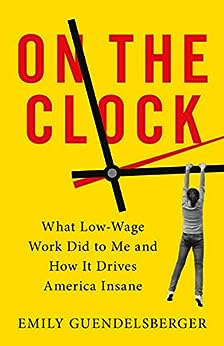 Everyone wants to write the next Nickel and Dimed, the classic undercover piece by Barbara Ehrenreich exposing low wage working conditions that the rest of us haven’t suffered. This was a sometimes good sometimes bad attempt at something similar, where Guendelsberger took 3 jobs after she lost her journalism gig in Philly. First up, the ubiquitous Amazon warehouse worker story that has flooded the market lately. Nothing new here, it sucks, she walks millions of miles a day and is in pain constantly, shocked by the vending machine dispensing pain killers. She sings to remain sane, is always happy to bump into a fellow picker alone in the warehouse where it seems the algorithm keeps them far apart. I did learn about “chaotic storage” here, a practice Amazon discovered wherein it’s faster to find an item stored among a bunch of dissimilar other things than to pull a particular size out of a container filled with the same thing; works for humans and you can be damned sure the robots do better with it.

Her next job is in Hickory, N.C. at a call center, helping AT&T customers. She’s living in her car, then squeezes into an apartment with one of her coworkers after spending too much money on a hotel room to beat the heat wave. People who call in are reliably terrible, but so are the systems she’s given to use. She has 8 or so different programs that are cobbled together and nothing really works, making her yearn for the efficiency of Amazon. Here, as in Amazon, every second is clocked and monitored, every late arrival and bathroom break, every phone call timed.

Finally, the worst portion of the book, her few months at a McDonald’s in downtown SF, probably the one on Market at Montgomery based on her comments about the homeless problem. She’s scored a free bedroom in Oakland through a friend of a friend, although she complains about the cat’s fleas. Even though she’s only living here for a few months, I find it sad that she gets her geography so wrong, talking about the view of the “Golden Gate Bridge as we cross the river to Oakland” (lol, what river?), and saying San Jose is half and hour from downtown SF.

She weaves in discussions about Taylorism, the lawsuits against McDonald’s, and makes up some hypothetical character named Wanda that honestly bored me so much I just skipped over the text whenever Wanda appeared. Could have been a much better book, but she made some poor choices along the way.