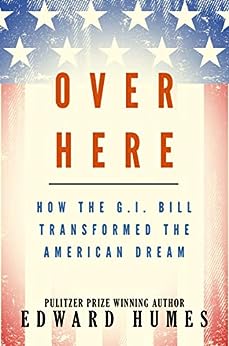 I’ve been thinking about the G.I. Bill lately and its impact on the arts, giving people like Frank O’Hara and Robert Rauschenberg college educations that encouraged them into their artistic pursuits.

This book wasn’t great, but it did have a chapter focused on the impact of the G. I. Bill on the arts. Other chapters focused around various (white, male) veterans and how they came back and benefited from the education credit and housing loans. Humes does mention how this overwhelmingly benefited white men and how women and minorities were left out of the great post-WW2 handout.

Black Mountain College in NC appears to have been saved by the returning veterans, with their college-going population dwindling to the dozens during the war. “Schools on the brink of bankruptcy were soon overflowing, and Black Mountain, with a record enrollment approaching one hundred found itself restored to a modest but stable financial footing by those $500-per-student payments from the Veterans Administration, an unimaginably kingly tuition in that place and time.”