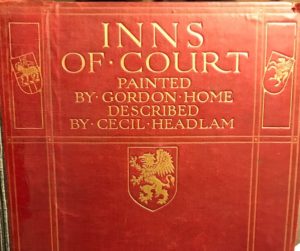 I became slightly obsessed with finding out more about that inner sanctum of London that I’ve read about for decades, those amazing bachelor residences of the Temple wherein great works of literature were penned and that are frequently referenced in classic works of Dickens, Thackeray. My latest literary crush, Samuel Butler, spent the last 38 years of his life living at No. 15 Clifford’s Inn, on the 2nd floor, the north side of the staircase, with a sitting room, bedroom, painting room, pantry, and passage with cupboards. Annual rent was £23 in 1864 and raised to £36 by the end, including taxes.

So down the rabbit hole I went, and I have 2 books about the Inns before me. A very dull one I rejected quickly was by Hyacinthe Ringrose, pub’d 1909, aimed at lawyers in US & Canada to explain the history of six centuries of law school in England. The best, most entertaining and delightful one, was by Cecil Headlam with illustrations by Gordon Home, also pub’d 1909. It’s one of those glorious old books with pages as thick as tree trunks. Headlam doesn’t hold back his opinion, calling out buildings for being ugly, as in this sample: “A plain, unpleasing, stuccoed, Early Victorian building now faces Chancery Lane and drops as a screen of ugliness across the old brick buildings within.”

But the Inns! Such fascinating history, dating back to the medieval Knights Templars who guarded pilgrims on the road to Jerusalem starting around the year 1118. Around the year 1180 they acquired a large meadow sloping down to the River Thames, south of Fleet Street, and built a hall and church and had a nearby tilting ground for jousts. Headlam points out that the first mention of the Temple as an abode of lawyers is in Chaucer’s Prologue to the Canterbury Tales (c 1387). Various grants and patents changed hands and eventually the Temple became a law school of sorts where aspirants to the bar co-mingled and shared meals and discussion in the Hall. (“The same system of discipline, celibate life, a common Hall, residence in community, and compulsory attendance at Church, which marked the ordinary life of a medieval University was repeated at the Inns of Court.”) In the 17th century, official instruction disappeared and simply eating dinners there was all you needed to be admitted to the Bar. “The loss of the Law was the gain of Letters. A new class of students, educated in literature and politics, and highly born, were bred up to take their place in the direction of affairs and the criticism of writers.”

They sound a bit like men’s clubs, and there was lots of rowdy festivals. Shakespeare first staged Twelfth Night at the Middle Temple Hall in 1601 (captured by a diary entry of John Manningham on February 1601: “At our feast, Wee had a play called ‘Twelve Night, or What you will,’ much like the ‘Commedy of Errores,’ or ‘Menechmi’ in Plautus, but most like and neere to that in Italian called ‘Inganni.'”). Several fires destroyed various incarnations of the buildings but some parts remain intact.

The apartments were in close quarters with each other and noise complaints weren’t unheard of. When Oliver Goldsmith received £500 for his play, he moved into No 2 Brick Court and threw lots of parties, to the discomfort of his downstairs neighbor Blackstone, who was writing below, finding “good cause to grumble at the racket made by his revelling neighbour.”

Charles Lamb lived at No 16 Crown Office Row and told a friend to “bring his glass” (bincoculars) to view Surrey Hills. His bed faced the river and he could see sails glide by as he lay in bed.

It is very strange to find so much of ancient quietude right in the monster City’s very jaws, which yet the monster shall not eat up—right in its very belly, indeed, which yet, in all these ages, it shall not digest and convert into the same substance as the rest of its bustling streets. Nothing else in London is so like the effect of a spell, as to pass under one of these archways, and find yourself transported from the jumble, rush, tumult, uproar, as of an age of week-days condensed into the present hour, into what seems an eternal Sabbath.