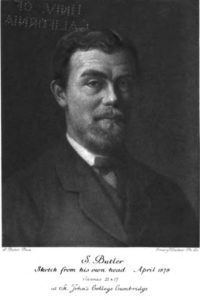 How delightful to find this brief sketch of Butler’s life from the pen of his pal Henry Festing Jones in 1913. The 40-odd pages are found in the collection of essays Butler’s literary executor put forth as The Humour of Homer and Other Essays. Even better, in Jones’ note at the beginning, he’s hard at work on a full memoir about Butler, which I just tracked down. When SB returned to London in 1864 from his four years in New Zealand (having doubled his capital to £8000) “he took chambers consisting of a sitting-room, a bedroom, a painting-room, and a pantry, at 15 Clifford’s Inn, second floor (north)… [his income from investments] produced more than enough for him to live upon in the very simple way that suited him best, and life in the Inns of Court resembles life at Cambridge in that it reduces the cares of housekeeping to a minimum; it suited him so well that he never changed his rooms, remaining there thirty-eight years till his death.”

In a letter to a friend he’d made in New Zealand, Butler describes his life: “I live almost the life of a recluse, seeing very few people and going nowhere that I can help—I mean in the way of parties and so forth… I find that it is next to impossible to combine what is commonly called society and work.”

In 1886, Butler’s father died and his financial difficulties ended, but he made few changes to his life except to hire a clerk (Alfred Cathie) and buy a new hairbrush and a larger wash-hand basin. Jones says “Any change in his mode of life was an event,” before going on to describe his typical day: up at 6:30a in summer and 7:30a in winter, light a fire and put kettle on for water for his bath, dress, make tea and cook in his Dutch oven something he had bought the day before. Breakfast and read the Times. To the British Museum by 10:30a writing until 1:30p. 3 days a week he dined in a restaurant on the way home, the other 4 days he ate at home whatever his laundress had prepared. Tea, writing letters and attending to accounts with Alfred until 3:45p. At 5:30p he got his evening meal (he called it his tea), usually exactly what he’d had for breakfast. He wrote music until 8p, walked over to Jones’ rooms in Staple Inn, returning to Clifford’s Inn by 10p. After a piece of toast and glass of milk, he paid a game of Patience, prepped his breakfast and things for fire in the morning, smoked his last cigarette of the day and went to bed by 11pm.

On Thursdays he generally went into the country to sketch or walk, and on Sundays he nearly always went into the country walking; “his map of the district for 30 miles round London is covered all over with red lines showing where he had been. He sometimes went out of town from Saturday to Monday, and for over twenty years spent Christmas at Boulogne-sur-Mer.”

Jones met Butler in Italy in 1878 when they were both on the Sacro Monte above Varese, and every year after that they went to Italy together.

This bit isn’t in the sketch but in Butler’s essay Quis Desiderio, too delicious to not put in here, a rejoinder I’ve been in need of for years: “I replied with modest pride that I was a Bachelor of Arts. I keep all my other letters inside my name, not outside.”