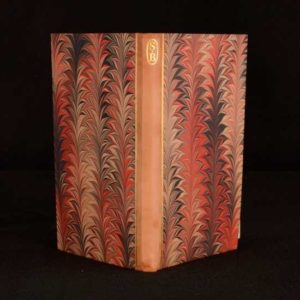 I rescued this gorgeous 1932 book (copy # 257 out of the 800 printed) from the library before it shuttered for the next few weeks. The craftsmanship makes your heart swell, perfect font, crisp photographs, handmade paper. It’s another collection of ad hoc writing from Samuel Butler, the one place where his entire Pauli explanation is given without editing; why, for the love of god, was he carving out £200-£300 a year out of his dwindling capital to give to Pauli, a man who he had no real friendship with, for dozens of years?

I think he says it best here: “Pauli impressed me as especially strong precisely in those respects wherein I felt most deficient… The main desire of my life was to conceal how severely I had been wounded [by his father and upbringing], and to get beyond reach of those arrows that from time to time still reached me. When, therefore, Pauli seemed attracted towards me and held out the right hand of fellowship, I caught at it not only because I liked him, but because I believed that the mere fact of being his friend would buoy me up in passing through waters that to me were still deep and troubled, but which to him I felt sure were shallow and smooth as glass.”

And once he was giving it, he was simply too much in the habit to keep giving Pauli his allowance each year. He broached the subject every year at Christmas but Pauli moaned and said (untruly) that he’d be ruined without the money. Butler seems to have recognized it as an obligation that he was required to keep performing until Pauli’s death, when he found Pauli had been earning a considerable amount at the bar and had other wealthy benefactors who knew nothing of Butler and vice versa.

Here also is the anecdote in full about Pauli’s handsomeness: “I remember how the late Captain Buckley, V.C., told me that when he and Pauli were at San Francisco together in 1860 or 1861 they went into the bar of the hotel where they were staying, and the barman asked Pauli to have a drink with him. Pauli tried to get out of it, but the barman said: ‘Oh, but you must; you are the handsomest man God ever sent into San Francisco, so help me God you are!’, with a strong emphasis on the ‘are.'”

Of other interest, Butler mentions that he’s only written two short reviews of books, one of Leslie Stephen’s Essays on Freethinking and Plain-speaking, the other on the philosophy of Rosmini.