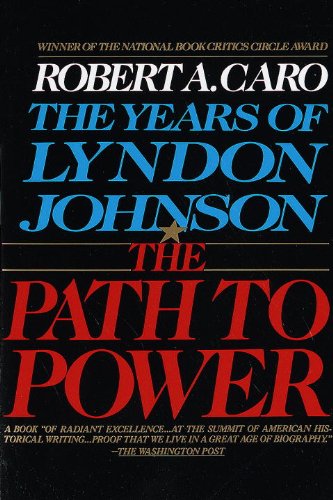 Reading Robert Caro’s latest book, Working, got me juiced up about reading LBJ stuff again, so I started from the beginning with Volume I. Johnson’s early years struggling with his family’s poverty, his sycophantic years just beginning in college sucking up to those in power, chasing after the daughters of rich men, fully energized, launching himself a career in Washington as the secretary for a local Congressman and taking the town by storm. He brings electricity to the Hill Country finally in 1939, for which they will be forever grateful. He greases the wheels and learns the maze of how to get things done, pushing projects that will help him get financial backing from Herman Brown which in turn he provides to other Congressmen in exchange for favors. Not my favorite of his books, but that may be because my interest in LBJ wavered midway through the 700+ pages. 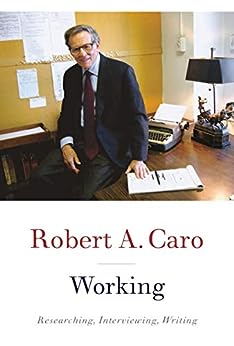 I’m so glad Caro took a break from LBJ to give us this memoir-lite describing his research process and early beginnings. If anything, I need to re-read Master of the Senate and Passage of Power along with the other 2 LBJ volumes I’ve skipped. My Robert Moses immersion was only a few years ago but am now considering a reread of that as well.

Turn every page while researching because you never know what gold you’ll stumble onto. He also writes “SU” all over his notes as a reminder to self to Shut Up while he’s trying to outwait an interviewee who’s silent. Seems like Caro was motivated by the general depravity of the current administration to get some thoughts out there about what his projects have been about (power, how people get it, how they use it).

Robert Caro’s massive biography of Robert Moses was published in 1974 after seven years of research, interviewing over 500 people, and writing. The resulting 1162 page are an incredible roller coaster with the arc of the story revealed in the Contents: The Idealist; The Reformer; The Rise to Power; The Use of Power; The Love of Power; The Lust for Power; The Loss of Power. This is a man who did much to shape New York for over forty years of his reign of terror: paving parking lots in Central Park, ramming huge expressways through heavily-residential areas, building endless miles of highways that became immediately clogged with traffic jams while gutting public transportation and denying brown people the right to go to the beaches he was creating. The book is almost too much; especially in my post-election trauma recovery, it was painful to encounter another lying, bullying egomaniac ruining people’s lives.

His sneakiness, deviousness, treachery knew no bounds. Latching onto Governor Al Smith, he becomes “the best bill drafter in Albany” and crafts laws with obscure passages granting wild powers, then misleads lawmakers into passing them. For his first land grab, he discovers an act passed in 1884 that allows the state to “appropriate” forest lands simply by walking onto the land and telling the owner that he no longer owned it. This definition of appropriation is written into his 1924 bill, and he later used it to great advantage in Long Island.

He used people mercilessly, then tossed them aside. One conservationist who had donated large tracts of land to be set aside for preservation was snipped out of planning and no mention made when plaques were laid to honor the park that resulted in Niagara. He worked his underlings to the bone, causing alcoholism, nervous breakdowns, marital difficulties. “There was at least one suicide.” When he wanted to take over land, he swept away hundreds of thousands of poor, or demolished necessary buildings like the Hospital for the Feeble-Minded.

But he got things done, so politicians loved him. He showed up with blueprints and walked away with millions in dollars from the federal government. By 1936, NYC was receiving one-seventh of the entire WPA allotment for the country. He got greedy for power, lied, cheated, swindled, and did whatever it took to obtain that power and to cement it.

Famously, he and FDR had a mutual hatred of each other. Moses insulted him and, of course, Eleanor. “I wouldn’t repeat what he said about Eleanor Roosevelt. Just say he dwelt on her physical appearance and her voice and was quite insulting,” said one source.

Does this sound familiar? As Moses runs for office, “his campaign was almost entirely a campaign ad homines, an exercise in wholesale insinuation and vituperation. Seeing his hopes for elective office vanishing, he spewed venom over his opponents.” More similarities: “He is the most unethical man I have ever met… he is a liar. And he is a liar in the way that Hitler was a liar. He doesn’t lie because he can’t help it. He lies as a matter of policy,” said Walter Binger.

He was big on grudges, maliciousness, and spite. He almost tore down Castle Clinton in the Battery—an important historical immigration station that predated Ellis Island—just because he could. He wasn’t a fan of non-whites or poor people: during the 1930s he built 255 playgrounds in NYC and only 1 in Harlem.

First obtaining power as a Park Commissioner, Moses didn’t think parks should be unspoiled nature, but teeming with tennis and basketball courts, stadiums, swimming pools, and concrete. Once he began his love affair with concrete, it was over. He believed absolutely in roads but never learned to drive, always had someone chauffeur him around, so he never had to deal with the agony of traffic jams. NYC caught on quickly that private cars were not the solution to their transportation woes. The NYTimes in 1945 has a letter to the editor that suggests banning private cars from Manhattan, and these types of letters became common in 1946.

As I suspected (I’m also reading Benjamin’s Arcades Project about Paris), Moses saw traces of himself in Haussmann. “He had long seen the parallels between his own career and that of the man who, in the modern world, ranked closest to him as a city-builder, Baron Georges-Eugène Haussmann…”

The massive build up to the loss of power takes a long time, but it’s worth it once the wheels start coming off Moses’ grip on the city. He insists on bulldozing trees in Central Park to make way for a parking lot, suffering damage to his otherwise stellar image. Newspapers begin to FINALLY start digging into the shady practices he’s used for so long, and his iron-clad noose on media turns against him. He tanks the World’s Fair, his last hurrah, ending up costing the city millions of dollars. He ends up a frustrated, deaf, old man with nothing to do.

Insults to bring back into circulation: blatherskite, bullyrag

A-ha! It looks like there was a chapter on Jane Jacobs that got cut from the book:

There are two entire chapters that were cut out that I’m sorry about. One was on Jane Jacobs stopping the Lower Manhattan Expressway. And one was why the New York City Planning Commission has no power so that someone like Robert Moses could run over the Planning Commission. Those are very significant things. Today I get asked a lot about both those subjects, and then I always have a pang of regret that they’re not in The Power Broker.

Once again, I am awed by the power of Caro to immerse himself so completely in LBJ’s life, spending years researching, combing through libraries, conducting lengthy personal interviews. In this volume, the years between 1950 and 1960 detail Johnson’s arrival in the Senate (under slightly questionable circumstances), his grasping and attaining power which previously did not exist, showcasing his genius legislative ability. He was a conductor, a maestro, sewing together compromises between a militant Southern anti-civil rights group and liberals from the North, recognizing that Western support could be thrown to the South by their cooperation on a water/dam bill. Unfortunately, I read this volume last year, and as the pace dizzied, frenzied with Johnson’s success and ultimate election as Vice President, I knew he was headed toward a brick wall of powerlessness. This volume showcased his ferocious strength, hard work, smarts, ability to read men, ability to get opposite sides of an argument to simultaneously think he agreed with them. Caro goes deep into the question of LBJ’s civil rights agenda, and leaves you with the impression that while he used it as a tool to further his quest for presidency, he was deeply committed to achieving equality of races. LBJ is the reason the 1958 civil rights (voting act, with jury trial amendment) passed, the first civil rights legislation in 82 years. He kept the South from filibustering and got the liberals to accept the toothless bill, evoking the image of getting the Senate to give up its virginity on civil rights legislation and future acts would be easier to jam through. This finger-jabbing, lapel-grabbing, do-what-it-takes politician did end up signing a much stronger bill once he was president. Caro does a tremendous job making Senate procedure come to life, clearly explained and the impacts outlined. Well written, dreamy to get lost in 1,000+ pages. Perhaps I’ll read volume 1 now, then flow back through the trilogy. I am left with the unshakeable suspicion that LBJ had something to do with Kennedy’s assassination, although Caro denies it. But his uncontainable naked desire for the position comes through in this book, and after being paralyzed in Vice Presidency with the specter of another term should Kennedy be re-elected, I can see dominos falling into place in his home state where the incident occurred.

This book is a stunning look at the five years between 1958 to the seven weeks after JFK’s assassination and the remarkable, masterful transition into the Presidency by LBJ. Tremendously well researched, carefully crafted, I am now going to dive back into the first three volumes of Caro’s detailed assessment of this pivotal American president. Enormously, powerfully recommended.

“President Kennedy’s eloquence was designed to make men think; President Johnson’s hammer blows are designed to make men act.”
Johnson was a man with a single mission in life, to become President. Growing up poor in rural Texas, he ascended by whatever means necessary (talk of the 200 “found” ballots all in same handwriting and alphabetical by name) first to the House of Reps and then to the Senate. He quickly took the reins there as well, becoming the Senate Leader and the most effective legislator in modern time, knowing exactly who to push and how to get legislation passed. At the height of his powers in Washington, he ran for the 1960 Democratic ticket, losing to Kennedy and being offered the VP role. Upon consideration of stats like “how many VPs became President” and “how many Presidents died in office”, he decided his best chance at becoming Prez was to accept the humble office of VP, essentially stripping away all power and being a figurehead with nothing to do, no influence. All of that changed in Dallas in Nov 1963.

The first hours, then days of his transition, were a masterstroke of command and restraint. Retaining key Kennedy staff in order to show the American people an image of continuity, convincing Warren and Russell to sit on the commission to study the assassination, beginning to get the logjam in Congress moving with the tax cut bill and the civil rights bill. When counseled not to press on the civil rights issue because it was a lost cause, Johnson wins my heart with, “Well, what the hell’s the presidency for?”