My wavering appreciation for Hoagland returned a bit stronger with this 2015 collection of poems. He’s still problematic, of course, but you can tell he’s trying to own up to his white male privilege, even if he gets to wink and nudge his way there: “I probably should not have called my class in feminist literature Books by Girls.” And his strange White Writer poem where he flips the designation, hating to be known as a white writer when he’s so much more.

“There is no single particular noun for the way a friendship, stretched over time, grows thin, then one day snaps with a popping sound.”

“The flaring force of this thing we call identity as if it were a message, a burning coal one carries in one’s mouth for sixty years, for delivery to whom, exactly; to where?”

Hoagland speaks from beyond the grave with this latest book of essays about poetry focusing on the voice of the writer. “When we hear a distinctive voice in a poem, our full attention is aroused and engaged, because we suspect that here, now, at last, we may learn how someone else does it—that is, how they live, breathe, think, feel, and talk.”

Great example poems in here and he seems to correct his gender imbalance a bit. Another reference to the Czselaw Milosz poem Ars Poetica? with this sentence: “The purpose of poetry is to remind us how difficult it is to remain just one person.”

I did not like the constant reminder after each essay to find corresponding writing exercises at the back of the book, it made it seem dumbed down.

My crush on Hoagland is crashing and burning, no surprise. I waded through these lectures/essays and noticed a faint whiff of the stench that ubiquitous white male arrogance brings to the table, invariably. At least he’s dead and so won’t be horrified by my change of heart. At one point he calls Mary Oliver “the Miss Manners of poetic convention,” which made my misogynistic spidey senses start tingling. Then I started noticing that most of his examples of poems in the essays were by men, a handful of women sprinkled in. Rage simmered once I reached his treatment of Gertrude Stein; no one is able to refrain from poking fun at her awareness of her own genius.

A few things I did take from slogging through this: fragment is the unit, juxtaposition is the method, collage is the result.

And an introduction to the wonderful Matthea Harvey, whose poem is here:

More goodness from Hoagland in his final book of poetry, poems about oncology waiting rooms and realizing things are better than expected, “I have outlasted the voluntary numbness I required in order to remain alive.” Letters to his father, “He is the language that you use when you speak harshly to yourself, trying to hide the fact that you are lost.” In Moment in the Conversation, after a woman drops a casual reference to her husband and realizing he’s probably been leaning in too closely, “Life used to be a whole subdivision of crazy possibilities but now it’s just a few quiet rooms on the second floor in the economy motel near the edge of town.” In Trying to Keep You Happy, I love this image: “On summer days, the southwest breeze will carry the drowsy mumbling of bees out of the corn and grapevines across the kitchen window sill where in a little tray above the sink the bar of soap your hands have touched repeatedly is waiting to be touched again.” In Frog Song, comparing the croak of bullfrogs to the voices of dead fathers, “at a certain hour of the night they begin to speak with disproportionate satisfaction from the warm porridge of the swamp, where they believe they are geniuses and kings, having discovered an unexpected gift for throat-singing, and an ability to love themselves they were denied in human life… Father—go take your place among your kind, content in the oily moistness of your skin, replete in your ability to catch the quickest bugs. I would have loved you more, if only I had known you were a frog—amphibious, mottled, and small-brained; not intimate by nature; preferring to stay half-immersed below the water line; so much a part of nature’s plan you are oblivious to it.”

And from The Third Dimension, this, after comparing himself to Odysseus:

I don’t know why I thought it was a good idea
to go through life hidden.
It must be something I picked up while traveling.
Clearly it has something to do with self-protection.
I just have this preference for keeping the edges blurry.

The only thing that confused me was the inclusion of the poem Playboy in here again, it was in his 2009 chapbook, Little Oceans, but nothing else was repeated. 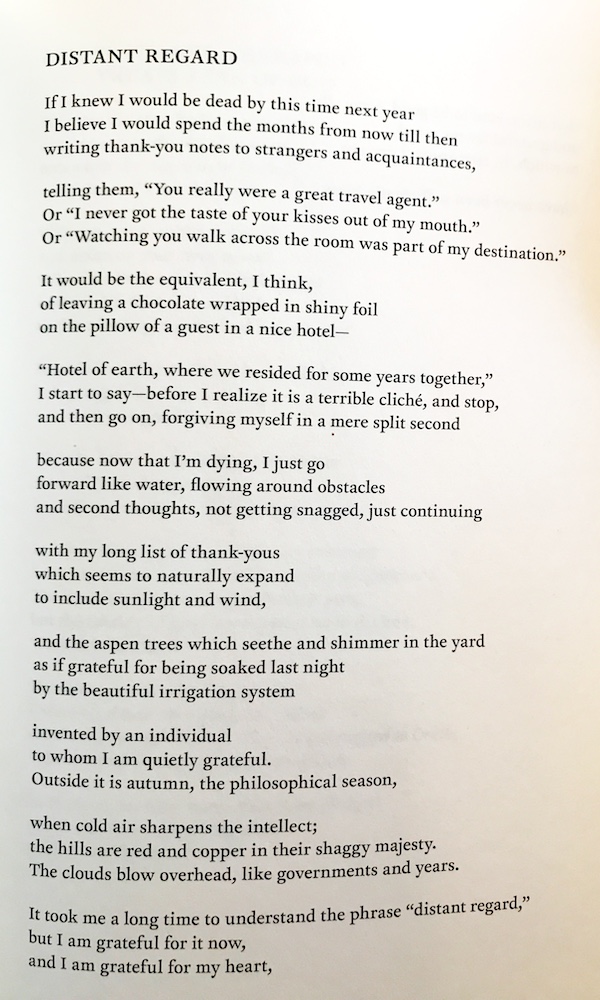 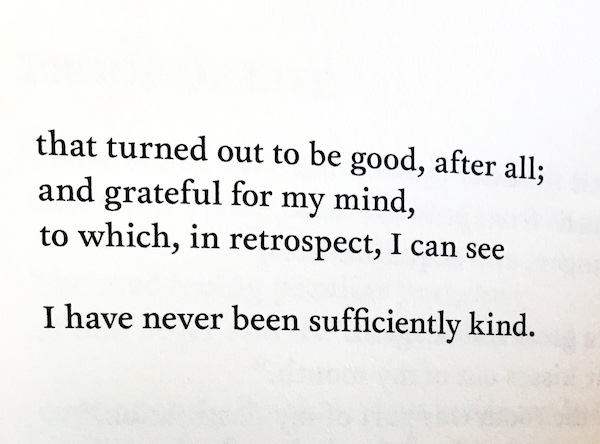 From another book of poems that I skimmed but am not putting up here because I can’t stop thinking about it: 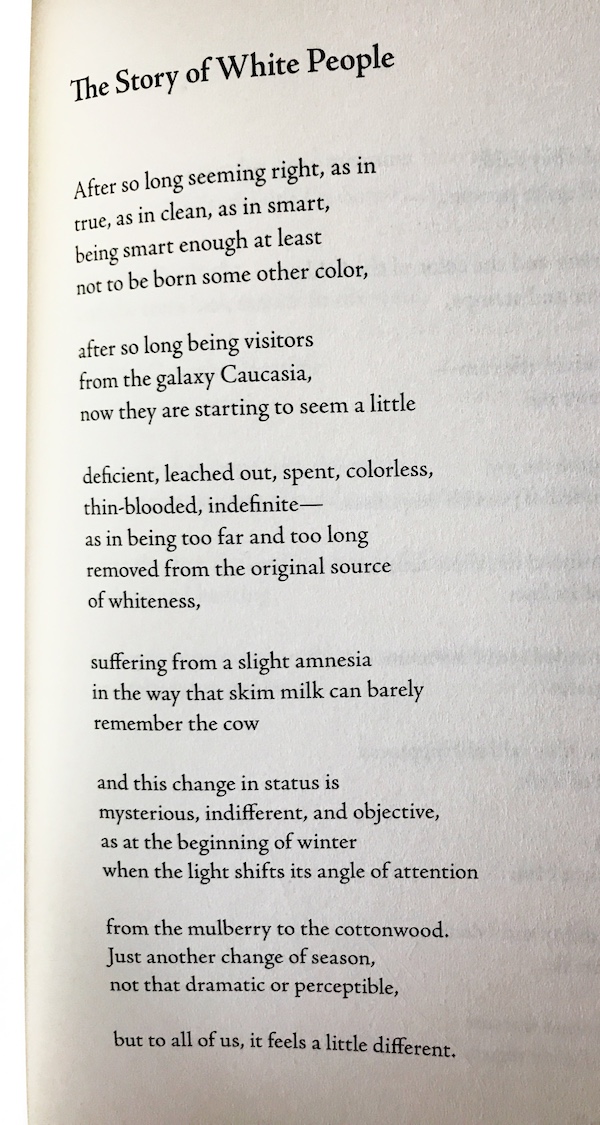 This 2003 collection contains a few of the poems people were chattering about recently that drew me to Hoagland. My initial flurry of swoon is waning a bit, as it is want to do, I can never sustain a writerly crush for long on contemporaries for some reason. I’m a bit put out by his weird racist-adjacent writing, rooting for the white girl in the tennis match against the strong black woman, anti-rap music in another. But then I come around again with poems like Hate Hotel: “Sometimes I like to think about the people I hate. I take my room at the Hate Hotel, and I sit and flip through the heavy pages of the photographs, the rogue’s gallery of the faces I loathe. My lamp of resentment sputters twice, then comes on strong, filling the room with its red light. That’s how hate works—it thrills you and kills you with its deep heat. Sometimes I like to sit and soak in the Jacuzzi of my hate, hatching my plots…”

Another favorite: Reasons to Survive November:

Hello to a new poet crush who I read all the way home from the library, cackling with delight and reading poems quietly aloud as I strolled, only pausing to look up at intersections where death machines (e.g. cars) lurked. Someone mentioned Tony Hoagland in my digital world today, and, in need of a brisk walk, I hied down to the main library to scoop up his work.

His phrases are to die for, “swinging her credit card like a scythe,” “the guy on the rowing machine who is stroking across a cardiovascular ocean.” 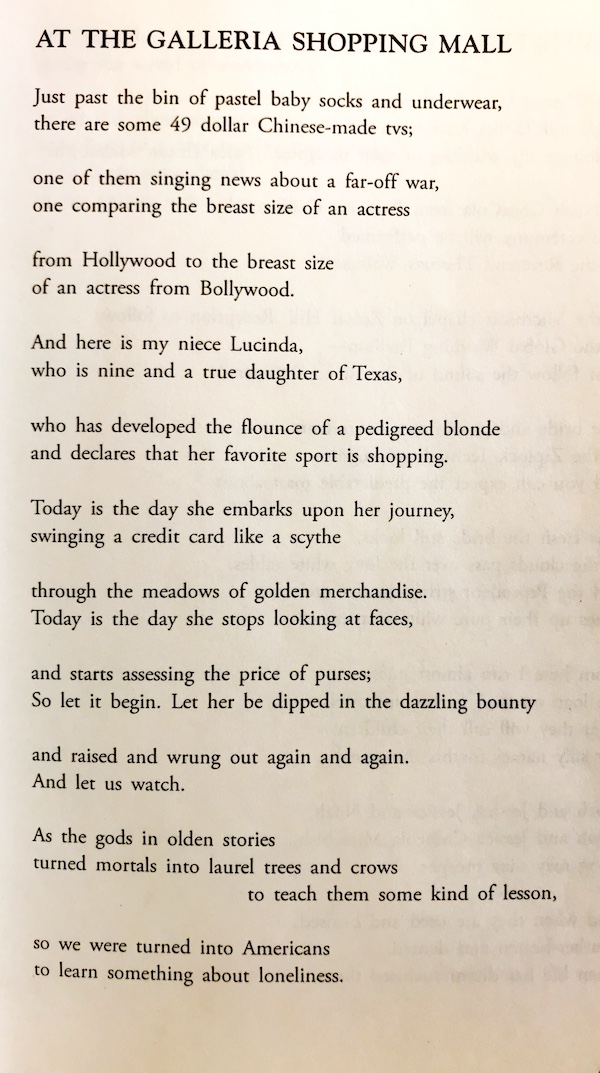 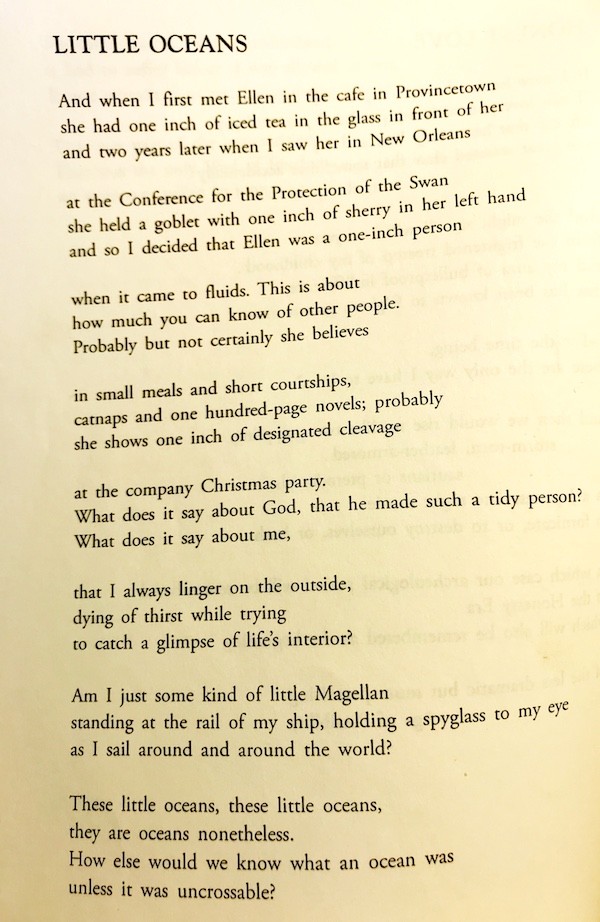