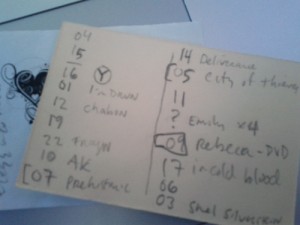 The fear is palpable. Poorly shorn men and women gather downstairs at the main branch of the library, clutching their books, brazenly ogling the others who mill about. Getting checked out at the library. And getting checked in for the night’s entertainment: speed dating, with a literary flourish.
We all dutifully bring books to use as conversation starters. We wear numbers on our chests, if we like someone, we bubble their number on our card and if they bubble our number, match-tastic! Slipping into the last seat, I steel myself for the onslaught and give my friend the thumbs up across the room. The librarians break down the logistics of the evening: the men will snake around the room while the women remain seated. Even the librarians seem nervous, sweated armpits, frenzied.
For the next hour and a half I have nineteen conversations lasting four minutes each.
I meet a cute twenty-something fresh from Brooklyn, reading Zorba the Greek, living in a homeless shelter, who spits paper hearts out of his mouth during the conversation. And a lawyer in a purple shirt, cocksure and flaunting his book: 15 minute meals by Cooking Light. There is the leopard print pajama-bottomed dude with a self-help book, a long haired sci-fi lover who launches weather balloons on weekends, and a Yelp salesman extremely impressed with himself for working at Yelp, reading a history of Palestine.
There are a few effeminate men, one self-published his own book after firing his “real” publisher over creative differences. The other effem has teeth which defy explanation and whose hometown is “the terrible city”, which is not Detroit, as I guess, but LA.
I meet a self-conscious guy with braces carrying one of Roald Dahl’s children’s books. When I mention Dahl had all his teeth extracted in his twenties, Braceface shifts uncomfortably in his chair. There is someone who brought a notebook of his own jokes, with one word jokes like “Alf-ghanistan.” My last conversation is with a whirling dervish, glasses fastened together with electrical tape. We cover so many topics in four minutes it feels like we are on fast forward: literature, comics, pop culture, the new Smurf movie and protests he’ll be leading against it. After the frenzy he hands me a card with link to his 80s appreciation tumblr.
At some point, the men’s snaking breaks down and it becomes a free for all. Men beeline towards cute girls. Chaos reigns. Librarians try to pull us back into order by decreeing a mingle hour, but we ignore them.
My friend meets a woman who brought a book titled All About Scabs. There is also a woman who brought Bukowski and Eggers, trying to appeal to a broad range of men.
When I first proposed this event to my friend, his response was, “What on earth would I gain from this? OK, I’ll do it.” After we survey the shambles of the room, and I see his exhilarated face, I can tell it was a success. He bubbles five girls on his card. We decamp to the bar to debrief, double orders of bourbon.
The next morning, he IMs me, “I now officially regret three of my five choices.”