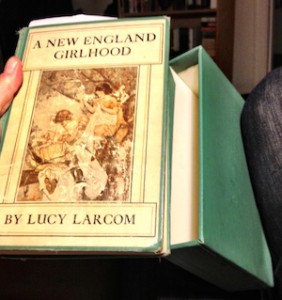 I thought that I grabbed this book in my attempt to find background info about life in 19th century Boston (for Fanny Fern research), but it turns out to have been serendipitously recommended by the Lenny newsletter. Great minds! I scored a first edition (pub’d 1889) from the library, which arrived in its own protective box (see photo). The librarian said he knew the book had to be headed my way since it was yet another old tome rescued from the archives and I’ve been pumping these hundred year old books through the branch for months now.
Lucy Larcom sits down near the end of her life to pen her memories of growing up in Beverly/Salem/Lowell MA in the early 19th century. She describes growing up in a neighborhood of large families, enjoying the privilege of “a little wholesome neglect,” wandering all around the village with freedom unheard of today. Kids are rounded up to spend time in Aunt Hannah’s schoolroom (her kitchen or sitting room), and while she taught she would spin at her flax-wheel–evidence that manufacturing was still taking place inside the home as well as at the mills that Lucy would eventually work in, at age 13, finding time to write poems on scraps of paper, sneaking books in (forbidden in rooms with machines).
Entering into the famous Lowell mills, Lucy paints them as a lively place which emphasized education after work, encouraging writing for the newspaper and bringing women together who would otherwise have been sequestered in their own homes. She says this “taught them to go out of themselves, and enter into the lives of others. Home-life, when one always stays at home, is necessarily narrowing… We have hardly begun to live until we can take in the idea of the whole human family as the one to which we truly belong. To me, it was an incalculable help to find myself among so many working-girls, all of us thrown upon our own resources, but thrown much more upon each others’ sympathies.” Many of these Lowell women were teachers during half of the year and supporting themselves with mill work the other half.
Early on she finds that her time is more valuable than money, so she takes a job where she earns just enough for food and clothing and housing, giving herself enough time to study. “I never thought that the possession of money would make me feel rich: it often does seem to have an opposite effect… Let us be thankful for what we have not, as well as what we have! Freedom to life one’s life truly is surely more desirable than any earthly acquisition or possession; and at my new work I had hours of freedom every day. I never went back again to the bondage of machinery and a working-day thirteen hours long.”
Random note– I’d never thought about this, but Lucy pairs “outgo” with “income” as its opposite.
Her thoughts on marriage:

I took it for granted that marrying was inevitable–one of the things that everybody must do, like learning to read, or going to meeting… I heard somebody say one day that there must always be one ‘old maid’ in every family of girls, and I accepted the prophecy of some of my elders, that I was to be that one. I was rather glad to know that freedom of choice in the matter was possible.