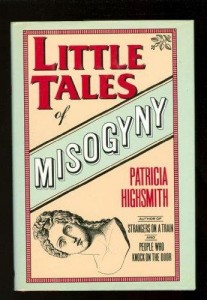 The best thing about this book is the cover, so I hunted for a good image of it (without being overly stickered by a library). This is actually a pretty terrible thing to say about a book, especially so early-on in my love affair with Highsmith’s writing. But I found little of comfort in the seemingly hastily cobbled together stories that she churned out in this collection. It seems this was first published in German, translated by Richartz, in 1975, which seems odd until you read the stories and think that perhaps she just shat this book out knowing that her words would be chiseled away into Deutsch by someone else. As the Guardian review notes:

The book was first published in 1975 in German, under the title Kleine Geschichte für Weiberfeinde, appearing in English two years later. I should have looked closer at that German title: it means, literally, “little tales for misogynists”. This is not a book to teach the misogynists a lesson: it’s something you might give a misogynist on his birthday.

Which is probably why I’m not terribly enthusiastic about the book. I did recognize one of the stories—The Fully-Licensed Whore, or The Wife—from the Aunt Lute Anthology (Vol 2) which was probably one of the stronger stories.