This time capsule from 1995 of Suzi Gablik’s interviews with people about whether art matters/what is art for during the apocalypse that we were surely witnessing 20+ years ago seems more prescient today as we edge closer to the end times. I got a handful of ideas for reading material from this, but otherwise it was pretty average. I enjoyed the interview with the representatives from Guerilla Girls, and I did like the format she used, where she laid out the interviews chronologically so that she would reference the opinions of interviewees that had come before and get reactions to those. 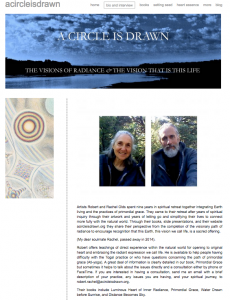 The second interview was with Rachel Dutton and Rob Olds, sculptors in LA who gave up art to homestead in New Mexico and then sent a letter stating that they were giving up everything, selling their land and studio to get the money to take a series of courses by Tom Brown about wilderness survival skills. They gave away or destroyed all of their art and cancelled all upcoming shows. Gablik mentions that she interviewed them on July 20, 1992 but then  never heard from them again. Curious, I scanned the interwebs and sadly found their website, they surfaced from their survival journey and had joined the woo-woo culture of extreme spirituality. Including a snapshot of their website for when it goes down eventually. Rachel passed away in 2014 but Rob marches on. They sound 100% bonkers in this interview with Gablik, singing the praises of this Tom Brown guy who used to “stalk in New York City,” yikes. “He would hide in the crevices, the little corners of buildings in the city, and he watched homeless people. He watched people going to work. He watched everybody… Of course, that’s one of hte skills that you are taught at the school—stalking.”

In another interview, she dives more deeply into technology with Theodore Roszak, waves of technological enthusiasm that wanes, and he expects the same thing with the current (1993 interview) computer craze. “Now it’s ‘high tech’: with a computer linked to your television and your telephone, you’ll have heaven on earth. And I’m sure there are people who are willing to try that out. But I’ll make a prediction that in another generation, this will look like a bunch of defunct old equipment. Nothing will work the way it was advertised, and at some point, people will be turned off by it… It may be that after a certain number of these waves of enthusiasms have passed and left disappointment behind, people will finally get the point, that technology is never going to be what Francis Bacon thought it would be: the secret of immortality and salvation.”

Her interview with Carol Becker is great, Becker raising the point that American society is fundamentally anti-intellectual and always has been. She compares our setup to that of Spain where the newspaper would quote artists and poets asking them what they thought about the Gulf War. “The populist image in America seems to mean the lowest common denominator, as if the American public could only handle the simplest, most banal and one-dimensional kinds of statements, or films or books.” Later in this interview, they get on the subject of the computer, “a very nonmaterial nonphysically based form in which things happen electronically, not on the physical plane… we’re moving out of the physical plane as a species. I don’t know if it’s good or bad.” Gablik responds that this scares the shit out of her. Becker goes on, “I don’t think anybody’s really written enough about what this individual absorption with terminals and machines means—you know, people’s obsession with their computers and InterNet and E-mail and all these things.” (caps as written out by Gablik in 1993). “We’re moving so fast we don’t even have time to reflect on where we’re going.” Gablik responds that she’s chosen NOT to go to the digital world, “my instincts tell me not only that this is a direction in which I, personally, don’t want to go, but also that it’s a dubious direction for the whole human race.”

Discovered via the Baffler article on good books for dark times.