This was a weird book. Carolyn Merchant writes this as a way of explaining the origin of the Audubon Society through a lens of gender divisions of that era, and most of the book is Grinnell’s writings, collected here for the modern reader instead of locked away in the handful of libraries that still holds issues of the first The Audubon Magazine.

Part 1 is Merchant’s discussion of Grinnell’s life in NYC, growing up on the Audubon estate and taking lessons from Lucy Audubon, John James’ wife. Part 2 encompasses Grinnell’s biographical writings, of Audubon and of Alexander Wilson, the competing avian artist. Part 3 is a reproduction of the birds that Grinnell featured in each issue of the magazine. As for the gender lens, the focus was mostly on the fact that birds were sacrificed to make women’s hats until conservationists shamed the industry and women. Men hunted, women wore hats. Women were also involved in the conservation movement, but the men who saved forests, mountains, and big game had more prestige than the women who saved birds and flowers. “Political Hermaphrodites” was a turn-of-the-century term used to denigrate men who joined forces with women in reform movements.

Of interest in the book were the passages highlighting the tension between Audubon and Wilson; Wilson is painted as one jealous of Audubon’s talents and who doesn’t even mention A. in his volume of American Ornithology. Grinnell cites Charles Wilkins Webber’s comments about Wilson, “We will not add to the gloom which followed the illustrious life of poor Wilson to his grave by any officious comments upon the tenor of this short narrative. I will add, though, that it should be remembered, in forming any judgement of that strange moody man, that he had bitter woes enough to content with, not only in his friendless early days, but in the harsh isolation of his weary wanderings and unappreciated after-life, to have grown a gall beneath an angel’s wing.”

While in Kentucky, Audubon got  a chance to hunt with Daniel Boone who showed of his skill in “barking off” squirrels.

And… the 36 names that people were using for the Northern Flicker/Golden-Winged Woodpecker. Yucker might be my favorite: 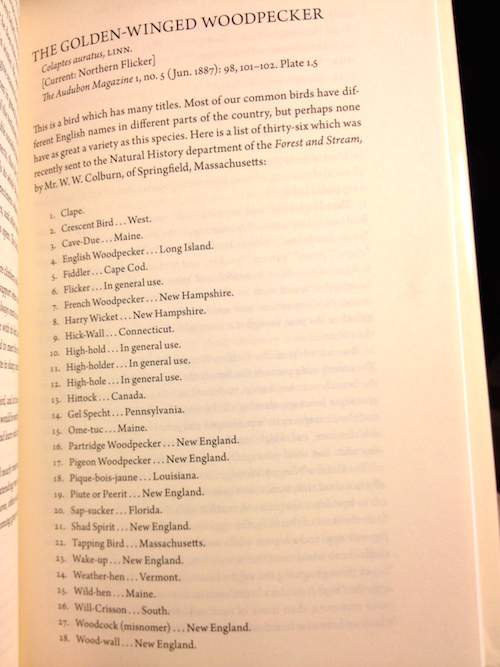 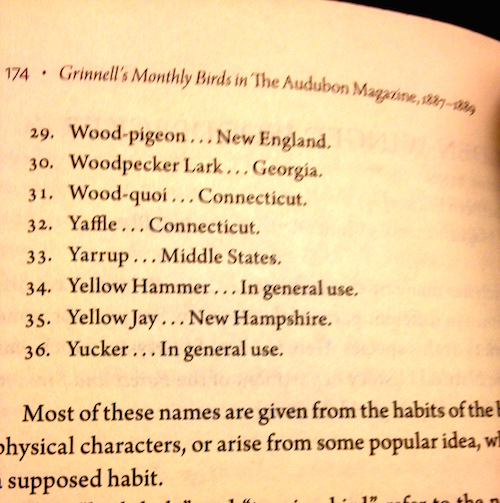 *****
Heard of Carolyn Merchant by way of Suzi Gablik’s Conversations Before the End of Time.