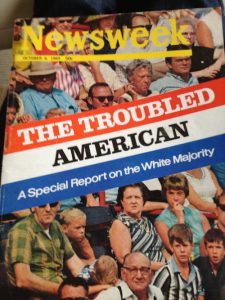 I came across this special report by way of Barbara Ehrenreich’s Fear of Falling and found a copy online that I ordered up. It arrived, a pristine, un-thumbed-through copy of this 1969 report on the “white majority” that I looked to for insights into how my country is so wrong-headed in 2016.

A 47-year-old magazine is a wonderful thing. The ads alone are amazing, maybe because America was building some sexy cars for the 1970s. The ads are also horribly sexist, but more on that later. In the meat of the magazine itself, I was jolted by so many parallels to what I’m experiencing today. For one, the continual push to abolish the electoral college. The 1969 Senate was trying to send a bill to get rid of the electoral college and authorize popular election of the President. Oh for a time machine. 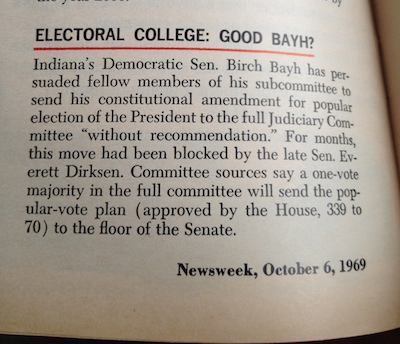 The Troubled American: A Special Report on the White Majority 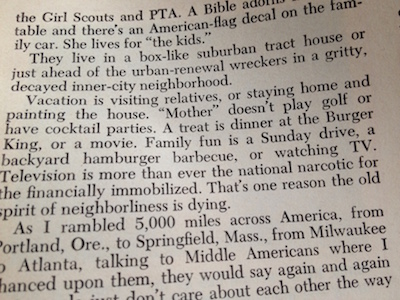 This troubling essay is punctuated with scary pull quotes like “You better watch out—the common man is standing up” and photos of grumpy old white men in front of American flags. Women live for their kids. “A treat is dinner at the Burger King, or a movie. Family fun is a Sunday drive, a backyard hamburger barbecue, or watching TV. Television is more than ever the national narcotic for the financially immobilized. That’s one reason the spirit of the neighborliness is dying.” Ah, that old chestnut, the decline of manners and friendliness pinned on the screen, the devil’s portal, TV. How far have we come almost 50 years later, a screen in every pocket, eyes glued constantly.

There’s some nice snark about Nixon: “He is doing the best he can with the ability he has, which I don’t think is too much.” 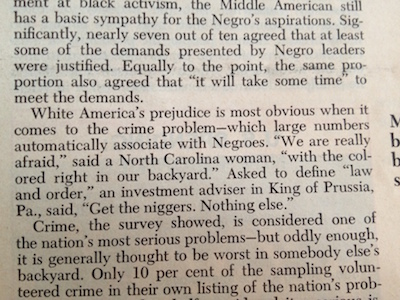 There’s a nice photo essay of Pittsburgh, supposed epicenter of this white majority who’s kicking about having to deal with integration of their unions, dealing with inflation, and generally grousing and being racist. 69% of the city’s poor are white, but 79% of anti-poverty funds go to non-whites.

We meet some of the families. I can sympathize about the pace of life, but 50 years later, it’s exponentially worse. Mr Huff says, “Everything is getting uglier and uglier. You can go 30 miles into the country and get away from it. But then it costs too much to commute. It’s having an effect. People get irritated now over things they would have laughed at years ago. There’s a lack of friendliness. No closeness. Half the time you don’t even know who your neighbor is, unless there’s a fight. Something seems to have gone out of people. Life is getting faster and furious-er. Sometimes you feel like throwing up your hands and saying to hell with it and going so far back in the hills they’ll have to pipe sunshine in. We’ve only got a few more years to contend with it. That’s why we rent, so when we’re ready, all we have to do is pack and tell the kids good-by. Then mamma and I will bum around out West until we find a place. There’s still a lot of beautiful country.” 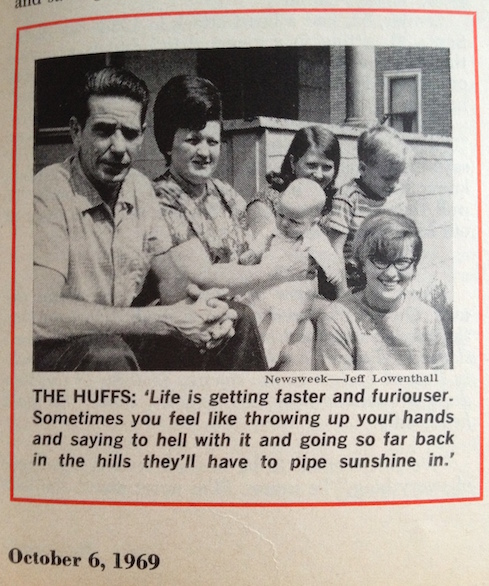 Did I mention racism? Here’s another extra-large helping of it, served up as steaming shit. Weird how Newsweek bleeps out “f——” but not the n-word. “Paint your face black and you can get a new Cadillac… We should have a Hitler here to get rid of the troublemakers the way they did with the Jews in Germany.” Lovely Texas assholes! 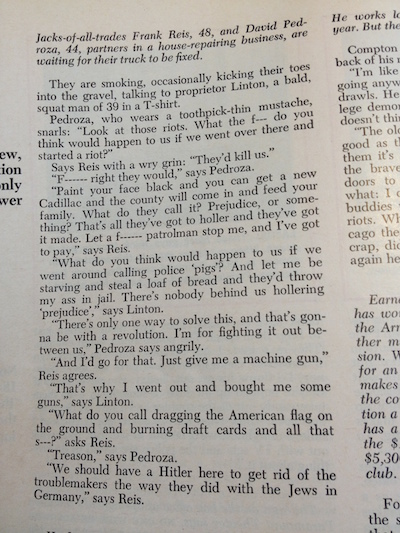 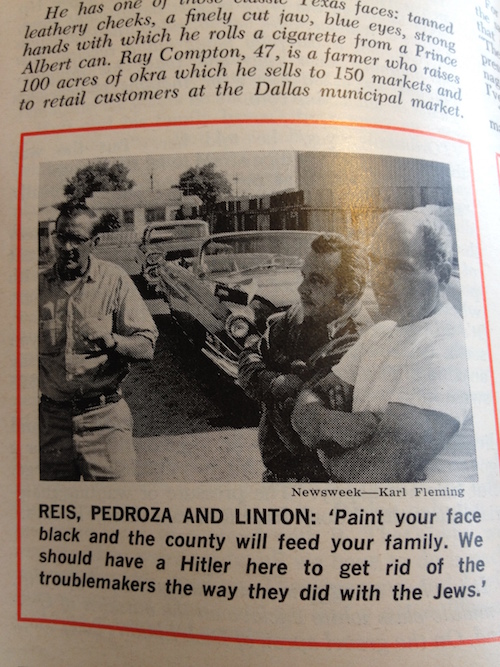 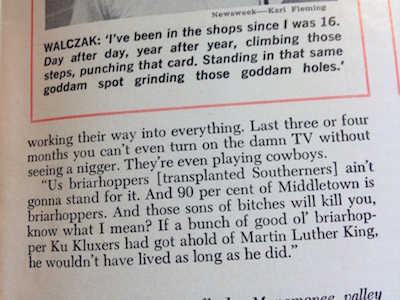 Guns and obese men who don’t wear shirts. How much has really changed in 50 years? This guy got a seat on the Newark city council after setting up patrol to protect white neighborhoods. Thankfully, he’s dead now, and the NYT obit says he began preaching armed white self-defense in 1967, at one point warning that “when the Black Panther comes, the white hunter will be waiting.” 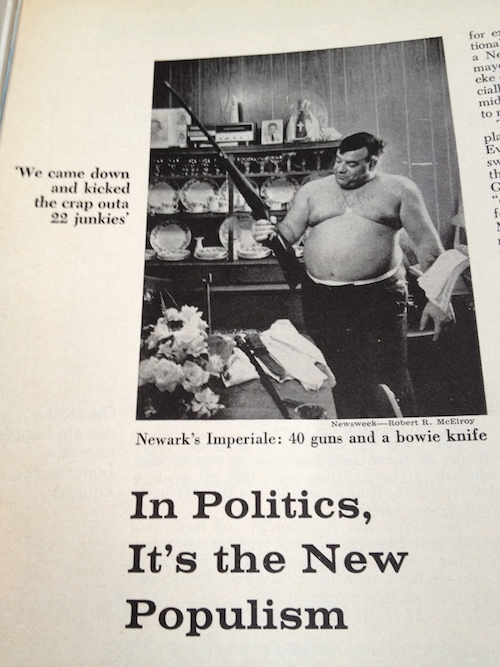 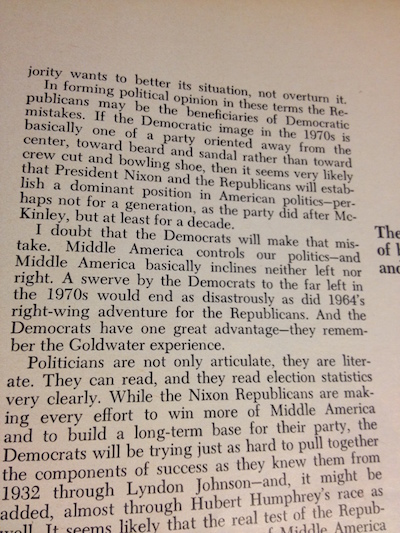 Pontificating about the future of the Democratic party in the 1970s. Will they orient away from center and toward “beard and sandal rather than toward crew cut and bowling shoe”??

One thing that jumped out at me in this age of Toxic T, the president-elect who we suspect to have extreme difficulty in reading/being literate: “Politicians are not only articulate, they are literate. They can read…” So funny these days!

Zip codes! Who knew that these were kind of new in 1969?! Apparently the Zone Improvement Plan (ZIP!) was introduced in 1963. 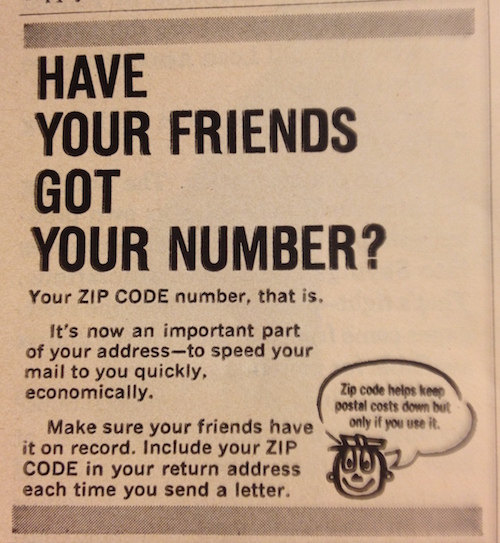 A scotch ad with an illustration of old white men drinking, the tag line telling you to “ask the men who drink it.” Japan Air Lines boasting their hostesses’ training goes back centuries to provide “an almost telepathic ability to anticipate your needs” (booze, foot rub, happy ending? it’s not difficult to guess these needs). An IBM ad that assumes a businessman dictating to his woman secretary. World Airways two-page spread about the world’s most beautiful stewardess, “this bright, delicate University of Georgia graduate loves art, people, and ‘living each day by itself.’ Girls like Becky have helped us prove that service on charter flights can be just as attractive as the price.”

And then there’s this gem. Western Union includes two telegrams, with two unwitting HR violations. The first mentions a report that was finally located “under a stack of Playboys in Cohen’s office.” The second brags about signing a cookbook author whose local town is naming a school after her “despite opposition from local society of weight watchers. She also agrees to do five commercials for us. If only she looked as good as she cooks, we’d have no problem.” 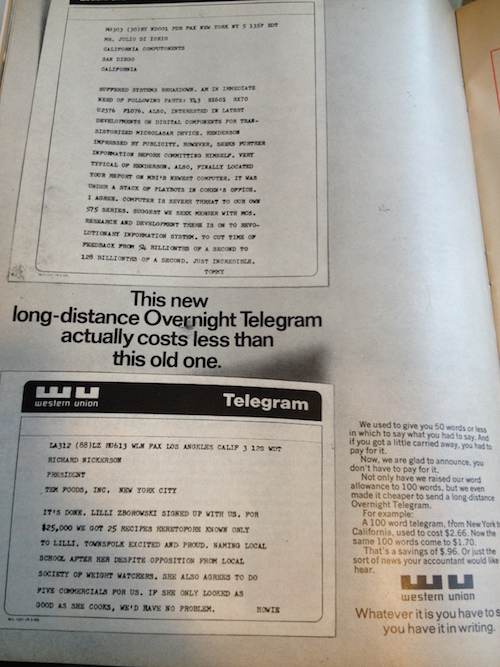