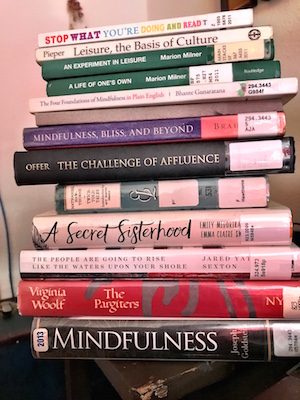 A batch of books headed back to the library, most of which I tossed aside after attempting. Of this group, I ended up reading 2 to completion, and I purchased one from the bookstore to be able to mark up appropriately. The gray one without a title is Cheery Old Schopenhauer’s Studies in Pessimism which I choked down quickly, holding my nose at his wildly misogynistic essay on women and straining to pass his anti-Semitic thoughts for saner passages.

I had high hopes for Marion Milner’s two books, but did read A Life of One’s Own. I attempted her follow-up An Experiment in Leisure but quickly jumped ship when I saw it was another meandering discourse of self-experimentation that slowly gets her to awareness.

I had high hopes for Secret Sisterhood but they were dashed immediately by the tone of the authors. I should more carefully follow my rule never to read a book that stemmed from bloggers. There was absolutely nothing new to be gained about the friendship between Woolf and Mansfield, although I’m at a disadvantage from having read all the primary source material already.

The Challenge of Affluence looked extremely promising at first, ringing out a very clear initial sentence “Affluence breeds impatience, and impatience undermines well-being.” However, the author does not do anything to bolster the assertion, follows up with stats to prove how affluent the U.S. and the U.K. have become and how no one gets married, we eat too much, and we’re really soulless pigs lost in the wilderness of late capitalism.

I’m in the midst of reading Moby-Dick and its hundreds of pages of notes, so was curious about Twice-Told Tales by Hawthorne, which Melville had recently read. I don’t think they’ve held up well to the test of time.

The Pargiters I’ve had my eye on for awhile, curious about this rejected manuscript of Woolf’s never published in her time. Unfortunately, the text is true to history and contains all of her edits, etc, which made it an unpleasant read. Maybe another time.

That The people are going to rise like the waters upon your shore : a story of American rage was written by a Bernie bro became evident within minutes of cracking the spine, relegating it to the trash heap.

Another week, another crop of books to tear through. I’m thankful for the meaty classics like Moby that help get me through these lean times. To the library!