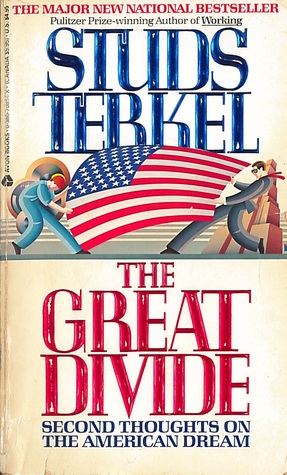 It is refreshing and almost soothing to see that the same issues we’re grappling with now have been around for a while. This book came out 30 years ago in 1988 and the voices sound like they’ve been interviewed today—grappling with greed, capitalism, racism, neo-nazis, ultra-religious nuts, worrying about nuclear war and quality of life declining for future generations. Somehow this takes a bit of the sting out of the slap we were dealt in 2016 with the election of McDonald Tr*mp—this stuff has been simmering for a long time, we were just in our progressive bubble and refused to see it. The only real difference is that unions were a lot more prevalent back then. Now, they’re an anomaly. And more people were actively protesting nukes.

Per his usual style, Terkel interviews hundreds of folks and lets their words do the talking. Art Spiegelman kvetches about art students not knowing anything about the 1960s (“They had never heard of underground comics. Nobody in the class had ever heard of Robert Crumb. This is not the general public we’re talking about. These people are aspiring to be cartoonists…”) and he had to explain protests against the Vietnam War to his class. Another teacher discusses how censorship has morphed into people withdrawing books they don’t like from the library, “often one that is feminist in theme”, paying the fine and the book is never replaced.

I particularly liked Isabelle Kuprin’s interview: “I’m a copywriter for an ad agency. It involves being a total asshole. I do it for the money, it’s easy and horrible. I do nothing good for society. I mean, I help people sell cheese. The talent is being able to sit in meetings and listen to people talk about an adjective for four hours.”

Douglas Roth is also a hero– a pastor in a small Pennsylvania town that was ravaged by steel mills closing, he led an effort to get the bank to reinvest in the town. One of their tactics was to send people with $10 to ask for that in pennies and to drop some of them, get in line, pick them up, ask for nickels, cause chaos. Another was a fish action: taking out safety deposit boxes and filling them with frozen fish. “By Monday, they were beginning to raise their own odor. Boy it was really something! They had to drill out the boxes. They drilled into one lady’s jewels and somebody else’s heroin.”

Another hero: Jean Gump, mother of 12, jailed for a demonstration at a nuclear silo. As part of her interview, she reveals the ridiculousness of the government, telling the story about an inmate who lay in the yard and got a sunburn then an incident report was written up for “destruction of government property” because she destroyed her own skin.

TV is blamed frequently. “Now you don’t talk to anybody ’cause you got your head stuck in that TV.” Also: “Television is fucking up the country completely, making us more violent and more druggy. The Sistine Chapel ceiling of American creativity is the thirty-second television commercial. That’s where America’s genius is concentrated. What are they telling us to do? Consume, look after number one, pamper yourself.”

“Television could be a very great thing for politics. It could create the revival of the stump. Instead, it actually destroys analysis, debate, reason, and substitutes advertising. One-liners. Two-liners take up too much time.”

Reagan’s election on race: “Reagan made it very accepted to be a white bigot. It’s the most fashionable thing. Now they say: America is white… When I was comin’ up, it was embarrassing to be considered a racist or bigot. Now I think people take pride in it.”

Another similarity to current times: in 1987 there was a football players’ strike. “What really disturbed me was the attitude of the fans. How easily they were manipulated into support-not of the players, whom they come to see and love to watch-but of the owners, who never played a game in their lives… It was amazing to hear million-dollar sportscasters criticize half-million dollar ballplayers: ‘They make too much money.'”

Somewhat related: “People are really not interested in politics. They’ve got too many other interests. You find people know so much about football.If they knew the same amount about the stock market, they’d be millionaires. Trivialities have overwhelmed us.”

While we’re on the subject of politics: “The scandals, open or secret, are happening so regularly, it’s as if one is constantly irritated by a blow on the shins to a point where he’s no longer sensitive. What the Reagan administration has discovered is that that which becomes commonplace is no longer a scandal. The violations have been unprecedented in their repetitiousness. People have lost their sense of outrage.”

“Unfortunately, America has got religion in a way that it hasn’t had before… Shrewd political people have recognized the potential of grabbing hold of the religions constituency… Their basic appeal is to people who feel left out. Marginalized people, who have an emotional hunger. W.H. Auden has a line about the wild prayers of longings… In a world that’s in chaos, fundamentalist religion provides you with a well ordered world, an architectonic world. It helps you get through. These programs have a lot of appeal to people without a sense of history… It’s fast food. It’s just there, it’s bland, it’s inoffensive, it fills you up for a while. And it helps. Sadly. You’re given answers. You’re not presented with problems. The idea is not to reflect, because that’s disturbing.” — Roy Larson, Methodist minister, Chicago

On the opposite end, Dennis McGrath, fundamentalist Christian in Brooklyn: “Most problems in public schools come from our throwing out prayer. Where’s the authority? It comes from God. Armageddon will come, of course. It’s part of God’s plan. Why stop it? I see no reason to stop it.”

Nancy Miles is a 23-year-old engineer who graduated from Cornell in 1985. “The attrition rate is enormous, people leaving engineering, especially women. There’s a lot against us…. During the interviews, the company would ask if you could get a security clearance. Wow, I’m gonna be working at a place where the government has to know about me, know what I do, know my politics. How much of myself am I willing to give up to work in Silicon Valley?”

Black women will save us

A flight attendant whose pilot-husband regularly crosses her strike line complains about the lack of support the women have gotten in general. Except: “You know who have been doing the most fighting and sticking together in our union? Black women. Here in Chicago, black flight attendants have been our strongest core. They have been able to handle the negatives of being out on strike for six months a lot better than their white counterparts.”

“An ironic touch has been added during these past 10 years. Our life-cycle has lengthened in every decade, yet we are seeing early retirement more and more frequently… That’s the au courant phrase these days: early retirement. In some cases, it’s a euphemism for being fired. It may be a case of wanting a younger person. Or they may just do away with the job. The job is robotized or faded out. The job is eliminated. Of course, for people this age it is difficult to find work again.” – Maggie Kuhn, of the Gray Panthers, a national org militantly concerned with the rights of the elderly.

Anthony Bouza is the police chief of Minneapolis: “As for the country, I honestly believe we are observing a decline of the republic. There’s a major shift in American values, between the haves and the have-nots, the rich and the poor. We are screwing the poor people.” This is also a guy whose wife has been arrested 5 times for protesting nuclear bomb-making plants in town.

Terkel interviews a socialite, Sugar Rautbord, who has incredibly idiotic things to say, including about her visit to the White House where she’s briefed on Grenada and thinks there is still a war there. Terkel corrects her, saying that the U.S. won the war there already. “Well, whatever. We live in a democracy, so everyone has a right to an opinion.” At the end of the interview, she says it’s important for her and her ladies to run around with their Tiffany cups out looking for donations to their pet causes. Terkel: “Tiffany what?” Sugar: “Cups out. Panhandling, you know.”