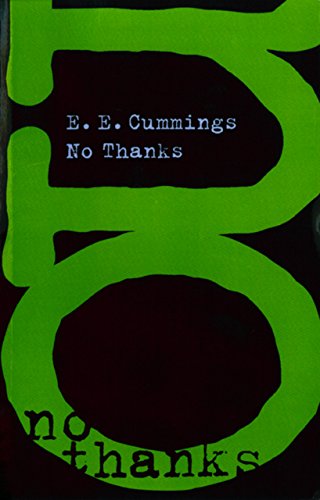 e.e. cummings serves us a master class in petty retribution with this, his sixth book of poems, self-published in 1935 and dedicated (with “no thanks”) to the 15 publishers who rejected his manuscript. His mom ponied up the $300 to privately publish this; his previous publisher had only sold 11 copies of Is 5 that year (sales down also due to the Depression). From the introduction, a few random bits of trivia: a reminder that cummings was pals with Joe Gould (immortalized by Joseph Mitchell), and he always referred to Samuel Goldwyn of MGM as Samuel Goldfish, which was his earlier name. cummings also thought about getting rid of the word “poem” to substitute “fait,” French for “the thing made,” thinking of himself as a faiteur.

Many delicious poems in here, including 21:

23 is also great, containing bits that are apt today: