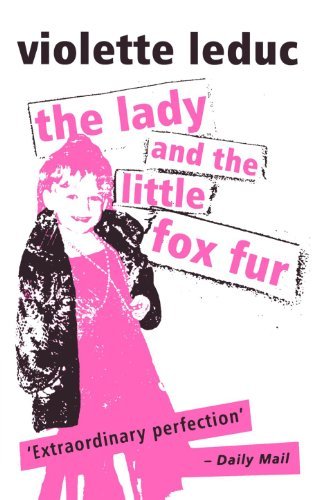 My first taste of Leduc’s fiction made me giddy with delight. As Deborah Levy says in the Foreword, “Violette Leduc’s novels are works of genius and also a bit peculiar.”

This is the story of a 60 year old woman who “was handling her sixtieth year as lightly as we touch the lint when dressing a wound.” She rents an attic room in Paris but is desperately poor, walking the streets and imagining life without living in the real world. She frequently opts to use money to ride the Metro instead of eating food, sustaining herself on the sights and sounds of the crowd that rushes past. At home she has a meager stock of a few sugar cubes, coffee beans, and potatoes that keep her going. It is February, bitterly cold, and she reminisces about a summer day wherein she woke at dawn to rummage through the garbage looking for a piece of orange to suck on. Instead she found a fox fur, which she then kisses and treats like her husband. Now that it’s winter, the time has come to try and sell it, and she’s rejected. Instead of getting much needed money, she whirls around in ecstasy that she’s been reunited with her love, the fox fur. She sticks her hand out and begs for a few coins which she turns into food. Back at home, she tucks the fox away, marches around, lies on the bed, and sinks into her own world. As she says herself, “her world consisted of nothing but what she had invented.”

“Living was simple: it was no more than a few habitual actions strong on to a routine.”