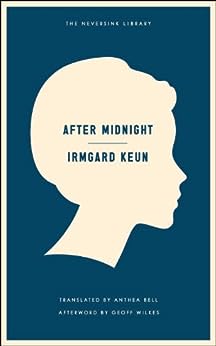 Absolutely brilliant rendering of what life in Nazi Germany was like in the final months before the war. I adored Gilgi and set off for more from this overlooked writer, discarding The Artificial Silk Girl as too similar to Gilgi and settling on Nacht Mitternacht, pub’d in 1937 in Amsterdam where she’d fled (before sneaking back into Germany in 1940 under an assumed name.)

The life in Frankfurt is hellish, everyone spying on everyone else and ratting out the slightest infraction to the Gestapo. Sanna, our narrator, is a 19-year-old who doesn’t like getting lectured by Goebbels on the radio and thinks Hitler sweats too much. Her aunt reports her, she flees Cologne after a hideous interrogation, goes to live with her step-brother, a popular novelist whose works are now banned by the Nazis (basically Keun’s situation). Bits dribble out through the story, her stepbrother wants to off himself or escape his life, her cousin/fiancee Franz has just killed an ex-SS officer, a guest at their party (an outspoken anti-Nazi) has just shot himself in the head during the party after this speech:

I’ve spent over ten years writing my fingers to the bone, racking my brains, to warn people of the madness of the barbarism ahead. A mouse squeaking to hold back an avalanche. Well, the avalanche has come down, burying the lot of us. And the mouse has squeaked its last. I am old and ridiculous: no power or desire to begin all over again… There are plenty of others to say the rest of what I have said for me…

This came out in 1937. Germany was well aware of what lay ahead. Keun lays it out so simply. I’m astonished that we don’t have more voices like this reporting from right up until the edge of the war.