An overly ambitious project from McGrath, to capture the 20th century in 100+ poems (at least one for each year of the century) and somehow get at the essence of that time. Reading it, you’ll be forgiven for thinking that women barely exist, although he throws us token bones in the form of nods to Gertrude (which is actually one of the best poems- see below), Virginia, Sylvia (married as always to mention of Ted), Frida, Georgia. Part of my problem is knowing too much about Woolf to enjoy her fragments in here, of course mentioning her suicide (so exasperating that this above else is remembered, just like Sylvia’s poem).

I did enjoy a few other poems in here, like the one for Edward Bernays (1928), the man enlisted to craft a PR campaign that would get women smoking, the man behind the force of advertising that swept over us in the 20th century. Other favorite was Hiroshima (just the letters ‘a’, ‘o’, ‘*’ scattered across the page, raining terror down below).

Overall, he grants the voice of authority to Picasso and Chairman Mao by giving them frequent poems throughout the century. Elvis got an inexplicably long poem, and Woody Guthrie & Orson Welles pop up occasionally. 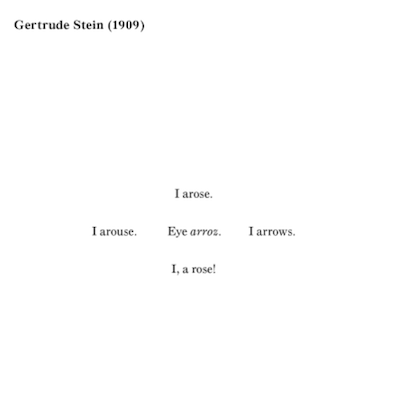