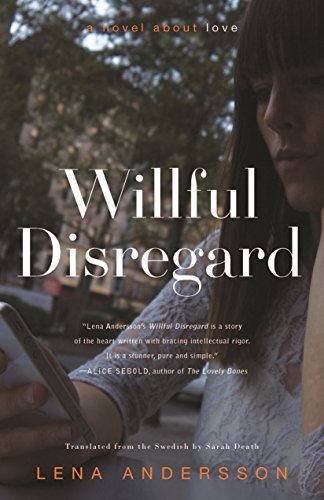 I came across this translation of the Swedish novel by Lena Andersson in the New Yorker, which describes “the frightening, hilarious speed with which a rational voice can turn irrational.” It’s a book about how the intellectual poet, Ester Nilsson, dissolves her sensible relationship with a man named Per in order to chase an unrequited love for artist Hugo Rask. We see her lose her senses over this man, morphing from a pure intellect to a babbling idiot that you’re screaming at as you turn the pages, Don’t Do That!

In the beginning we see her as a successful poet, with 8 books published, having calmly pursued the study of philosophy. “From the day she found language and ideas and realized where her mission lay, she renounced expensive living, ate cheaply, was always careful about contraception, only traveled rationally, had never been in debt to the bank or to any private person, and did not get herself into situations that forced her away from what she wanted to spend her time doing: reading, thinking, writing and debating. She had been living like that for 13 years, and for more than half that time in a quiet, harmonious relationship with a man who left her in peace while satisfying her physical and mental needs. Then she got a phone call.” The call is to ask her to give a lecture on the artist Hugo Rask, which is when she dives deep and begins to fall in love with him, shucking off her previous life, leaving her partner (“Their whole relationship had been implied, so its disintegration also took place without comment”), briefly moving in with her mother then finding her own apartment.

Hugo, of course, initially loves that Ester is obsessed with him. “Hugo never followed up anything Ester said. Ester always followed up what Hugo said. Neither of them was really interested in her but they were both interested in him.” After a few months of intense conversation, they end up in the bedroom for a few days, then he stops responding to her. This is when the humiliation begins, she refuses to recognize his cues of disinterest, calling and texting him and stalking him outside his studio. “Grief cannot remain acute indefinitely. It soon gets moved to the day ward and then to the rehabilitation clinic.” But for the next year she continues to rake her feelings across the coals, hope keeps popping up that they could resume, humiliation continues. In the end, it takes her showing up at his studio to return a DVD and joining him and his other woman for dinner, waiting around on the sidewalk until the lights go off, knocking on his door, him looking like he “swallowed a snake” because he was waiting for the other woman, not her.

The Russian poet Mayakovsky pops up again for the second time today for me, a sign from the universe, referenced throughout the book. The other sighting from Anne Boyer.

Translated from Swedish by Sarah Death.