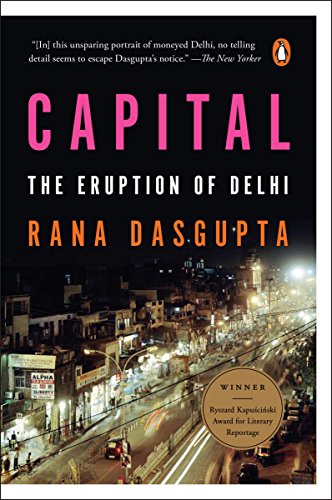 Incredible book weaving the everyday histories of people who live in Delhi into the historical thread, the violence of the Partition in 1947, the disruption of British rule, the eruption of capitalism in the 1990s. Dasgupta is a UK citizen who worked in NYC until he journeyed to Delhi around 2000 and never left. In this, he gathers stories from the incredibly wealthy elite who sip expensive drinks and chat about their Lambos and BMWs from walled-enclaves protecting their green golf courses and lush pools. He also visits the other end of the spectrum, people squatting in slums who are powerless and are blown over with every political gust that attempts to eradicate them. It’s beautiful, lyrical writing capturing the bizarre feelings of the moment, how global capitalism is ruining this particular corner of the world. Describing one pair of brothers who work hard but don’t acquire many things, “It feels as if they are living in permanent temporariness, acquiring nothing that might stand as an obstacle between them and their eventual retreat from this cultureless place.”

Interviewing an advertising executive who works hard and loves it, he explains how his wife wasn’t happy about his long hours but he undertook to educate her as if it were an advertising campaign “I took small steps to make her understand, I used analogies.” Eventually the wife has a baby to occupy her time and all is well. When coffee shops arrive in the early 2000s, Delhi “was suddenly awash in the stuff, its smell filling every shopping mall and office block, brown liquid pouring into the veins of this new sleep-deprived generation—who, as often as not, did not drink from a cup but, like their American counterparts, sucked at a sealed and odorless container, as if they nestled at capitalism’s plastic breast.”

“It says so much about the spirit of Delhi that this mood, this sense of living in the aftermath, has dominated the city’s literature until our own time… Delhi’s writers have consistently seen it as a city of ruins and they have directed their creativity to expressing that particular spiritual emaciation that comes from being cut off from one’s own past. This is both the reality and the fantasy of Delhi: the city is always already destroyed.”

“Now our city is about aggression, rage, inequality, corruption, and personal gain. It’s about consumerism and shopping malls… We have no beauty to leave to our children.”

A textile mill owner is self-reflective: “The system we are part of feeds on desperation. And any system that demands such levels of desperation will produce more and more disorder, and the only way to keep everything in check will be the increasing militarization of the world.”