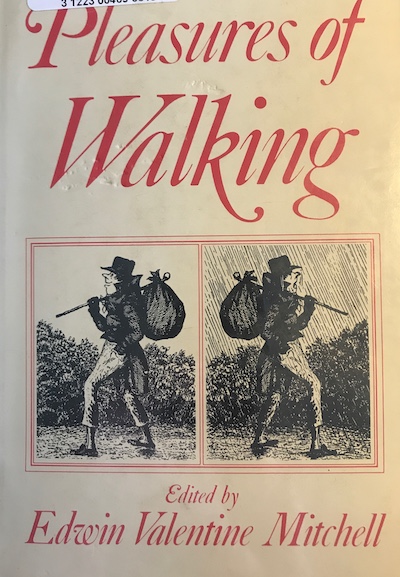 I stumbled onto this curious relic from 1934 when perusing a nearby shelf at the library. Oh for the heyday of publishing when an editor like Edwin Mitchell could have a boozy lunch and come up with a book idea that would take him half an afternoon to complete. He digs up essays from a bunch of men, mostly dead, tosses off a quick introduction, et voila! Sometimes he tells you where he culled the essays from (like Dickens’ The Uncommercial Traveller) but mostly he just plops them in there, with no helpful information such as date written. How egregious to have a book about walking that snubs Virginia Woolf but includes her less-eloquent father Leslie Stephen, who’s a fan of “a little trespassing” when necessary to get to the best paths. My own research shows that Stephen’s essay In Praise of Walking was from his 1898 Studies of a Biographer. Which makes all the difference knowing it was in the late 19th century when he said “Conversation, we are often told, like letter-writing, is a lost art. We live too much in crowds.”

There’s lively “discussion” between the essays about whether walking is good for writing, or conversation, or done best alone. Max Beerbohn’s Going Out for a Walk was entertaining, saying he never walks voluntarily and describes a painful walk with a companion who feels obligated to blather platitudes every few minutes and insists on “reading vapidly aloud to me” every sign he encounters. (Written in 1918)

Dickens gets two essays in here, which seems like cheating, but only one was worth including—Night Walks—wherein he describes the walks he takes through London when he can’t sleep, seeing a man bring a large cold meat pudding into a cafe out of his hat, and various other wonderments. (1860s)

George Macaulay Trevelyan’s Walking seems to have come out in 1913 in his collection Clio, a Muse, and Other Essays which I’ll probably check out. It starts out strong: “I have two doctors, my left leg and my right.” He’s a proponent of solitary, silent walking, and recommends taking a whole day off during a walking tour to gain strength. “Our modern life requires such days of ‘anti-worry’ and they are only to be obtained in perfection when the body has been walked to a standstill.”

On Going A Journey by William Hazlitt was first published in 1822, another vote for solitary walking. “I laugh, I run, I leap, I sing for joy… I begin to feel, think, and be myself again. Instead of an awkward silence, broken by attempts at wit or dull commonplaces, mine is that undisturbed silence of the heart which alone is perfect eloquence. No one likes puns, alliteration, antitheses, argument and analysis better than I do; but I sometimes had rather be without them.”

A few of the essays I had already encountered in their native habitats, like George Gissing’s Walking Experiences, taken from The Private Papers of Henry Ryecroft and Hilaire Belloc’s Brienzer Grat, taken from The Path to Rome. The collection ends with the obvious inclusion of Thoreau’s Walking.