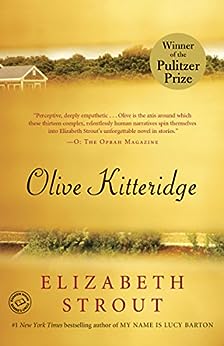 I’m not a fan of reading books after having seen the screen adaptation, but somehow having Frances McDormand’s face loom up from the pages wasn’t all bad, as long as the writing moved along creamily and pulled me under. Plus there are many more stories and layers in the written work than what could be depicted even in an extended miniseries. Sturdy Olive Kitteridge, retired math teacher with a saint for a husband, speaks her mind and has no love lost from the small Maine town’s citizens. Henry has a stroke, hangs on for years in a nursing home. Her son Christopher leaves town with wife #1 for California, only to get divorced and remarry a woman with a few kids of her own before settling in NYC as a podiatrist. Elizabeth Strout has the gift of weaving a tale out of nothing, making you invested in the characters in this small community, eager for more.