A bit windbaggy on the myriad of details about national park status, but some good summing up of history. Jotting some details I want to remember here:

And now we really come to the end. This last volume had her final burst of essays along with extensive appendices and several previously uncollected essays from 1906-1924. A true Woolf nerd delight, pages of errata detailed painstakingly, the three BBC broadcasts Woolf did are here transcribed, this is a hugely valuable resource.

My silly notation marked certain things like her calling Melville a “poet novelist” (alongside Emily Bronte and Hardy), but most extensive appreciation was for “The Leaning Tower” (1940) where she delves into philosophy of words/writing.

A writer, more than any other artist, needs to be a critic because words are so common, so familiar, that he must sieve them and sift them if they are to become enduring. Write daily; write freely; but let us always compare what we have written with what the great writers have written. It is humiliating, but it is essential. If we are going to preserve and to create, that is the only way. And we are going to do both. We need not wait till the end of the war. We can begin now. We can begin, practically and prosaically, by borrowing books from public libraries; by reading omnivorously, simultaneously, poems, plays, novels, histories, biographies, the old and the new. We must sample before we can select. It never does to be a nice feeder; each of us has an appetite that must find for itself the food that nourishes it. Nor let us shy away from the kings because we are commoners. That is a fatal crime in the eyes of Aeschylus, Shakespeare, Virgil, and Dante, who, if they could speak—and after all they can—would say, “Don’t leave me to the wigged and gowned. Read me, read me for yourselves.” They do not mind if we get our accents wrong, or have to read with a crib in front of us. Of course—are we not commoners, outsiders?—we shall trample many flowers and bruise much ancient grass. But let us bear in mind a piece of advice that an eminent Victorian who was also an eminent pedestrian once gave to walkers: “Whenever you see a board up with ‘Trespassers will be prosecuted’, trespass at once.”

Five unpublished autobiographical reminisces were a perfect way to wind up the project of reading all of Woolf’s work. Three of these pieces were papers read to the Memoir Club in the years after the Great War, and aside from her diary these are the only autobiography she wrote. For the pieces written for her Bloomsbury audience, she delighted in thrusting her spear at the sitting ducks in the audience, recalling her first meeting Duncan Grant as he shuffled up to her and Adrian at the Louvre, or perfectly nailing Desmond MacCarthy’s personality to the board for analysis. The memories of St. Ives and Cornwall are the bedrock of her consciousness, everything creative springs from that eternally refreshed well.

Every time I read Nye’s final poem of this book, Gate A-4, I can’t stop my eyes from tearing up. The rest of the pieces were just as precious, poetic musings that capture life freshly post 9/11 in the mid-aughties from the viewpoint of a writer born of Palestinian father and American mother, living in Texas. Poetry is vital and her book makes this case over and over. And now I get to load up on anything and everything else she has written!

This was awesome. I couldn’t get into her memoir (was it my mood?) but Lockwood’s first novel landed perfectly. Perhaps it’s the small chewable bits that make it ideal for covid-brain reading, but this has to be one of the best books that sums up our current state of affairs, our attention-deficit always-online swept from one meme to the next living in a state of terror from the tyrant. Into this setting she cuddles the story of her sister’s newborn, slated to live only 6 months with Proteus Syndrome (elephant man-itis). I heard an interview with Lockwood and she verified that this was taken from real life and her sister was pleased that the baby would be forever remembered in this book.

“Why were we all writing like this now? Because a new kind of connection had to be made, and blink, synapse, little space-between was the only way to make it. Or because, and this was more frightening, it was the way the portal wrote.” 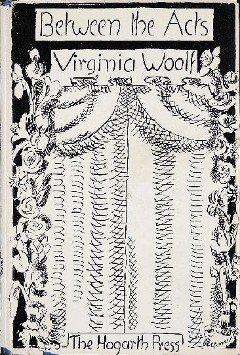 Stunning. Her best work? I feel this after finishing everything she wrote, and yet this makes a strong case for being her most ambitious work that succeeds in achieving the vision she had. Mixture of poetry and play and prose, dipping into people’s psyches, noting the precarious state of the world on a June day in 1939 as England hovered on the brink of war, the village come to Pointz Hall to view a play that pulled them through the many ages, culminating in flashing mirrors to reflect the audience itself. Gorgeous luscious writing, a miracle of assembly and disassembly, unity and separation. This signals the end of the works she intended for publication, as it came out a few months after her death. Yet my project marches on, into the autobiographical essays she perhaps never intended for publication, Moments of Being.