Anna Vitale’s essay about David Wojnarowicz’s “Arthur Rimbaud in New York” photographic series. She questions identity, suicide, solitude, psychosis.  “The Rimbaud mask, different from the image of Rimbaud, invites us to become compassionate witnesses to those whose lives feel unsurvivable without assuming the experience can be shared.” Surrogate self-portraits.

The reliance on Cynthia Carr’s biography for background info on the masks means I need to dip back into that again. Apparently it was 3 different friends in the mask: Brian Butterick, John Hall, and Jean Pierre. (Most of the other research I’ve read just references Butterick.)

David Wojnarowicz wrote these “monologues” as he called them, and sent them to Amy Scholder to get published in 1989 along with a letter saying “I wrote this book over the last thirteen or fourteen years. It’s all true.” The monologues are stories from the perspective of the many people he encountered hitching or driving across the country (SF, Washington State, Albuquerque are all represented), or on the streets of the Lower East Side or 42nd Street at 3AM or in a coffee shop or diner. True tales of love and lust and dreams for what was or what could have been. His own stories seem peppered in with other tales, and you can tell which those are by the rich depth of description of interior thought. The final story is taken “From the Diaries of a Wolf Boy”, from David’s notebooks, so much more clearly his story and perspective. It’s a way of sinking conversations with strangers into amber, preserved for eternity.

It’s highly likely that a curated selected of diary entries will leave everyone unsatisfied except the person making the choices of what to include. Amy Scholder admits as much, saying in the intro that anyone would make different selections from the thousands of pages, over 30 journals kept between 1971 and 1991, but she picks up a few threads and follows those to show his values, struggles, passion. He is a beautiful writer but I wish there were more in here about his creative process, how he worked, how he went about making the Rimbaud series. In a 1979 entry: “Possibly the way forward is for me to try to extend the range of creative acts to cover both images of beauty (silent disturbing beauty) and of intensity—in drawn images and in written images and in photographic images. In doing this—creating a range rather than keeping the beauty hidden as I have done within journals, head, etc.—then I can at least have the physical proof of that range, and thus no longer feel the need to explain it or prove it in conversations or apologize for not having shown the range in its entirety that I feel is contained within me.”

It seems a bit obscene to indulge myself in a time traveler trip to the early 1980s Lower East Side but I couldn’t resist. A time when artists were swirling around each other in the streets, collaborating, riffing, nudging, encouraging each other on. A time when you could “get real blood for a buck fifty at this butcher on 13th Street” and so everyone was making gory films with pigs blood and staging exhibitions with blood splatter.

This book of interviews is an attempt to pin down the elusive David Wojnarowicz—artist, writer, painter, activist, wanderer—who was briefly at the heart of the scene until fame jumped in to ruin everything. In an interview with Carlo McCormick, he explains why David stopped making art for a long while: “His whole idea was that when the media flashbulb goes off and burns everything away, the only way to stay creative and be an artist was to exist in the margins, in the dark recesses of the underground. We all felt totally invaded: the East Village scene had become a horrible thing.”

Lots of interviews with artists and friends and comrades of the period. Tales about 3 Teens Kill 4 (David’s band), early punk days, road trips, the Ward Line Pier project where artists took over abandoned and decrepit warehouses near the piers to fill with art and installations in 1983-4. 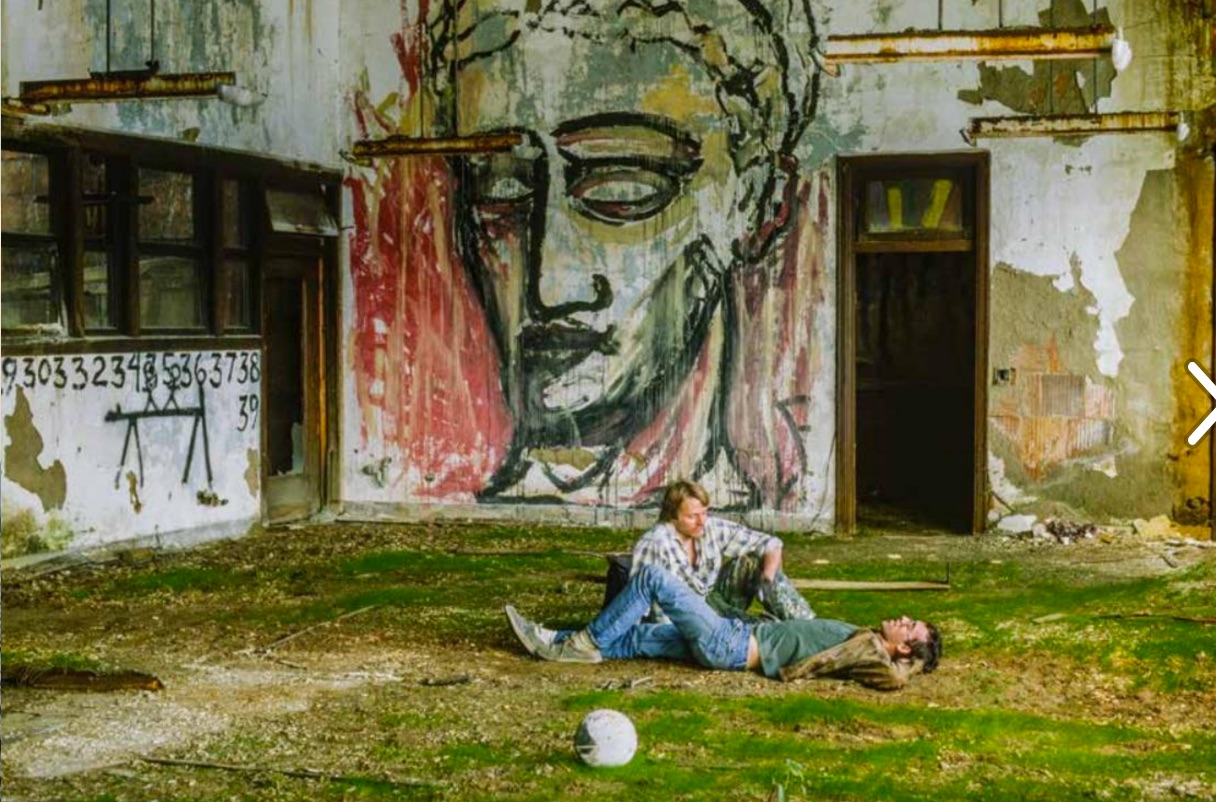 Like all humans, David was full of contradictions, both generous and stingy to a fault, obsessive about his art yet wanting to linger for hours over diner coffee. Unlike most of us, he was wildly productive and fought for what he believed in— hugely active in Act Up. There were horrible stories about how people died from AIDS, painful lingering deaths or planned suicides in the case of Haoui Montaug. Despite the danger, I come away with a pang for what was a free-moving, open, creative scene that seems to be in the past.

Some of my favorite of his work is the Arthur Rimbaud in New York series of photos. He took photos of a friend who was wearing a homemade mask of Rimbaud in various locations around NYC. 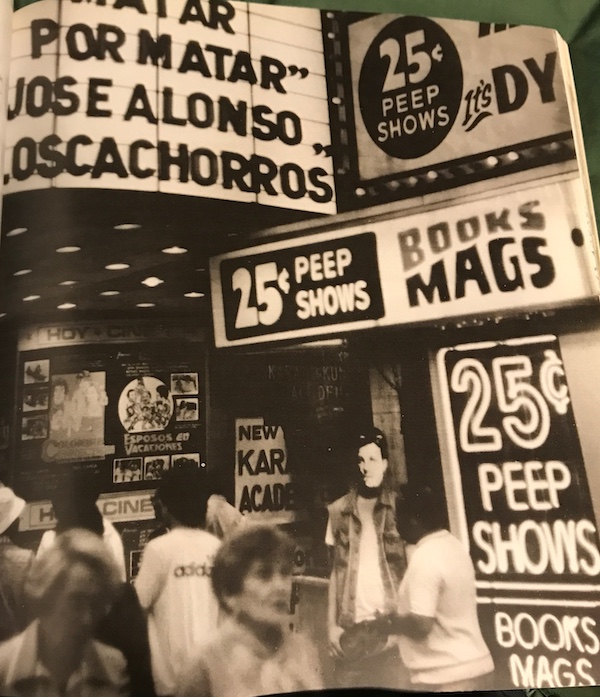 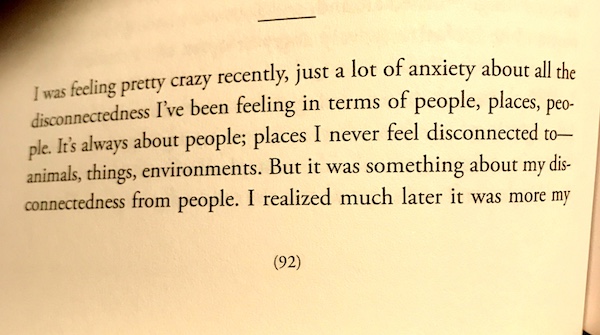 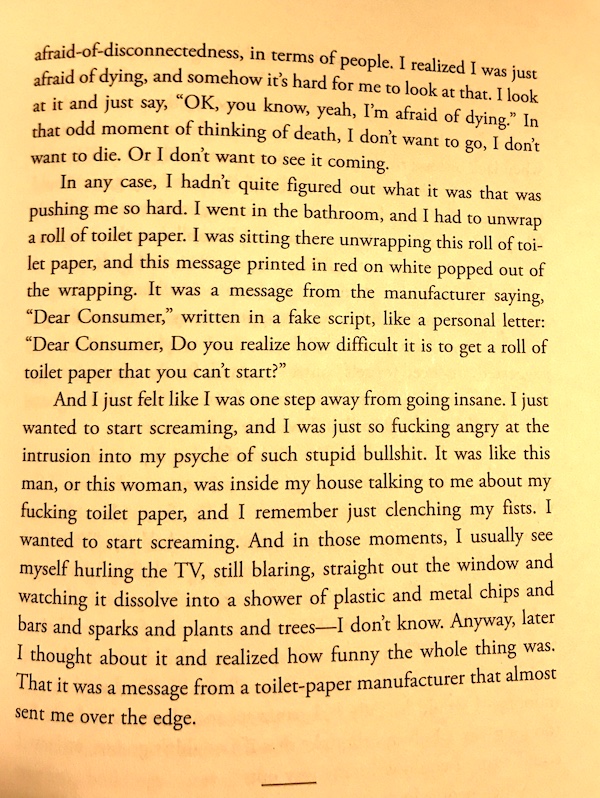 Stunning, poetic, political book by writer/visual artist/AIDS activist/filmmaker/painter/musician David Wojnarowicz (pronounced “voy-nah-ROW-vitch”) published a year before his own AIDS-related death at age 37 in 1992. It’s a memoir of 80s NYC hustling that is gripped by the constant deaths of friends from AIDS. He’s rightfully angry about existing in a world where his very being is illegal. The words spill breathless onto the page with an urgency born of watching those around him die. Pure prose poetry from beginning to end, wrapped in a rage blanket, spitting hatred at Reagan and the ineptitude of American leaders.